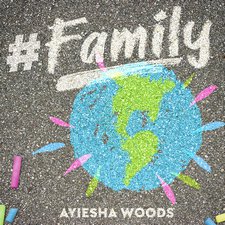 
Though her musical output has become more sparse of late, Ayiesha Woods is no stranger to the music scene. She has been around since the release of her award-winning 2004 independent album, What You Do To Me. Combining musical influences and genres, she is an eclectic mix of pop, r&b, and gospel, all carried by her soulful vocals. Following her independent album, she was discovered and signed by Gotee Records co-founder TobyMac after he heard one of her songs on the radio during a visit to Jamaica.

Soon after being signed, she made her introduction to the wider CCM world via debut album, Introducing Ayiesha Woods in 2006. With this backing, she blossomed to greater heights with radio hits and promptly added two additional records through Gotee in 2007 and 2009, respectively. Taking a break to start a family could have been the end of her musical career, but thankfully, she took up the microphone, recording music again, albeit the independent route through her own label. On it she has dropped a full-length album in 2014, following that up with a seven-song EP in 2017.

Now as a new decade, and a world-wide pandemic is upon us, she returns once again with the delightfully sunny pop tune, Family. Timely is a good word to describe this upbeat slice of infectious pop. As the world is social distancing, for better or worse we are all spending more time with family. This is both good and bad, as it is our family who knows us best, and thus which buttons to push, often alternating between a crucial lifeline and inescapable irritant. Here, Ayiesha is focused on the positive impact that our family can and does have on us. During the pre-chorus she proclaims resolutely, See, I know Ive got you/You know youve got me/Whatever we go through/We gon always be/Cause we are a family." It's a simple sentiment, but its simplicity doesn't take away from its sweetness. Later in the song, Woods further drives home the meaning of family as people we can count on singing, We celebrate each other when excelling/We pick each other up if were failing/Dont you know we have an understanding/Long as were together we are winning. These joyous declarations are all supported by a catchy pop melody replete with finger snaps and a dance-inducing beat.

Overall, this is a strong song at a much needed time and in history, and this reviewer for one is hoping she has more exuberant songs of encouragement up her sleeve in 2020, as this world is desperately in need of hope. Add this one to your active playlists immediately, and allow it to lift your spirits when you need a little pick-me-up.