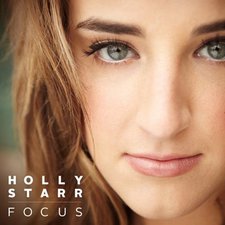 After a decent first national release, Holly Starr is back to the plate for another swing at CCM stardom. Throughout here sophomore album, Focus, Starr's sound has a considerably different vibe than her first album. Choosing a definably pop sound, she has widened the distance between her and other CCM artists.

Catchy and meaningful, none of the songs seem out of place. "Don't Have Love" shows that you can have everything in the world, but if you don't have love, it isn't worth any of it. It's a great message and has already received some airplay on Christian radio. "Let Go" is another highlight, sharing the message of letting go of our lives and letting God direct it instead.

Some of the lyrics still suffer as they are awkward to sing, like in "Satisfied," but most of the writing is much better than the last time around. A cross between Britt Nicole and Jamie Grace, Holly has obviously put some thought into this record. Overall, this is a great record for anyone looking for fresh, catchy pop music.