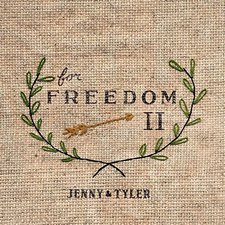 
After signing to a major label and releasing their national debut in 2015, folk pop husband-and-wife duo Jenny & Tyler have stayed busy, but rather quietly so. Perhaps the new baby on the way has a little bit to do with it! But recently, they've found some time to write and record some new music, which they've managed to surprise us with this month. For Freedom II is their second EP of cover songs; their take on some familiar tunes is quite pleasing to the ears, and all the proceeds of sales go to fight human trafficking.

The short (and perhaps unnecessary) intro "II" leads into the Coldplay classic "Fix You." The duo stays true to the original as far as tempo, melody, and overall feel of the tender song. When we get to the second verse, we're treated to the sweet sounds of David and Licia Radford, who are better known as The Gray Havens, another folk pop duo that you should familiarize yourself with if you haven't already. They fit in with Jenny & Tyler's version of "Fix You" very well. It's followed by my personal favorite track from the bunch, a cover of U2's "Walk On." The song is from U2's 2000 album, All That You Can't Leave Behind, and Jenny & Tyler bring new life to it and sound fantastic doing so. The 90s alt pop is strong with this one; when Jenny sings, she really captures the feeling of a hit song by someone like Natalie Imbruglia.

"Lightning Crashes" is an interesting choice of a song to cover. On one hand, I've always liked the song and thought it was one of Live's better songs. On the other hand, it can be a bit depressing, telling the story of a woman giving birth in a hospital as a woman down the hall passes away. The song does have an interesting juxtaposition, especially Jenny & Tyler's version as the down-tempo, slower music accompanies an event that one would associate with panic and maybe even chaos. The reason I say "especially" Jenny & Tyler's version is because, unlike Live's original, this version is completely acoustic and only picks up as the singers' vocals rise and become a little more intense. After such a moving song, the EP ends on a much lighter note, with what I've heard is considered by many to be the best song from a movie, "Somewhere Over the Rainbow." The classic song from The Wizard of Oz gets a little bit of a makeover, with a beautifully-plucked guitar and some light synth, and an ever-so-slightly changed melody in some places. The song also features guest vocals from American Idol contestant and current recording artist Kris Allen. His vocals are a bit cleaner than Tyler's and are easy to distinguish, but also fit the song wonderfully.

Jenny & Tyler has always been an enchanting musical duo. One listen to their independent albums and it's easy to see why they were picked up by a major label. And when they have freedom to do the things they want to do with their music, they really get a chance to shine. Despite how short this EP is, it's worthy of the few dollars it takes to own it. Even if you aren't a sucker for cover songs (like some people I know...me), there's a lot to like about these four songs. And if that doesn't sell you, I'll reiterate that the proceeds from For Freedom II are going to various organizations that fight human trafficking and slavery. Make sure to pick this up when you get the chance.