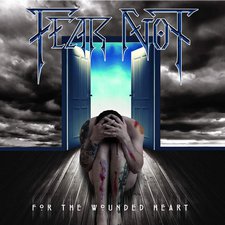 Fear Not
For The Wounded Heart EP


By the time the mid-'90s rolled around, producers John and Dino Elefante were virtually untouchable in Christian rock circles. Starting with Petra's seminal Back to the Street album in 1986, the Elefante siblings would go on to helm not only that band's signature effort (1990's Beyond Belief) but also a string of genre-defining works by Barren Cross, X-Sinner, Guardian and a host of other artists. It was into this rarified atmosphere that Larry Worley (vocals, guitar), Chris Howell (guitar), Rod Romero (Bass) and Gary Hansen (drums) first stepped to fashion their self-titled outing under the Fear Not namesake. Released in 1993, the eponymous undertaking was yet another melodic, hard-rocking triumph for the Elefantes.

Of course, timing, as they say, is everything. And given the fact that the grunge explosion would soon render such polished AOR-based fare all put passé to the vast majority of the hard music-loving masses, it comes as little surprise that Worley & Co. were unable to capitalize on the freshman record's momentum. If Fear Not had hit the shelves during the back half of the 1980s, its creators might well have enjoyed a successful run of albums similar to the remainder of the Elefante-produced roster. As it turns out, though, the group soon called it quits and its follow-on endeavor wouldn't see the light of day until nearly two full decades into the new millennium.

Fast forward to 2019 where, against all conceivable odds, the original foursome, joined this time around by new front man, Eddie Green, have just turned out a five-track extended player, For the Wounded Heart. Enthusiasts expecting the new effort to take up at the exact point where the inaugural offering left off are in for a bit of a surprise. Where the latter sounded as if it could well have been a lost Skid Row or Mr. Big record, the new EP is woven from a decidedly more alt-leaning cloth.

The sludgy, blues-inflected tones of "Don't Want None (Come Get Some)" and "Shipwrecked Hypocrite" are sure to elate those with fond memories of post-grunge purveyors like Candlebox and Days of the New. Green's singing may inhabit a lower range than Worley's (who moved to backing vocals and guitar for this EP), but it turns out to be the perfect vehicle for the tuneful and towering triumph of "Love Is Alright." And the slower-paced "Carry Me" proves beyond a shadow of a doubt that great power ballads didn't completely fade into obscurity at the end of the '80s.

Chinks in the armor do crop up here and there. The self-empowered-individual-versus-a-vague-enemy styled lyrics of "Don't Want None" ("I clinch my fists/ I can handle anything/ Just when you think I'm down") are more than a little threadbare by this point. And the molasses-like sonic aesthetic that blankets the proceedings, while certainly not an inherent liability, nevertheless renders the record a bit less dynamic than it otherwise might have been. But even with these shortcomings factored into the equation, the project, as a whole, is a solid and engaging showing, particularly for a band whose members last played together around the time the Internet was first becoming a bona fide thing. To be sure, Wounded Heart isn't merely a very good late-period album; it's simply a very good album, period.