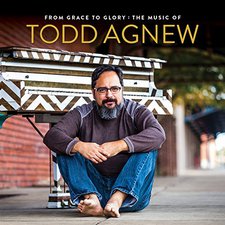 Todd Agnew
From Grace to Glory: The Music of Todd Agnew


Todd Agnew's 2002 debut, Grace Like Rain, was a praise and worship album that didn't quite sound like a praise and worship album (and that's a good thing). It foretold the attributes that would characterize Agnew's sound over the five studio albums that would follow it, introducing his versatility, songwriting, and atypical vocal delivery. It also contained elements fans would see again: scripture songs, an occasional well-chosen cover, and a keen and informed musical sensibility.

From that strong debut, Agnew would grow in his lyrical ability, crafting provocative songs that challenge believers to examine their faith and the works it produces. "My Jesus," from sophomore release Reflection of Something, shows off the unrestrained and convicting lyric-as-commentary that found Agnew complementing his worship acumen and developing into a noteworthy songwriter.

A full five years after his most recent studio release, Agnew catalogs his musical history with From Grace to Glory: The Music of Todd Agnew. The title notes the reverse-chronological track listing, from breakthrough "Grace Like Rain," which closes the album, to new song "Glory to Our Great Redeemer," which opens. (Get it? "Grace" to "Glory?") It also describes the salvation experience, the believer's journey from an encounter with God's grace to an eternity in His glory.

Modern music's song-at-a-time digital age has rendered traditional greatest hits albums as little more than suggested playlists. With that in mind, Agnew sought to mix in a few unreleased tracks, demo versions, and songs from albums many listeners might have missed. The result is a collection featuring songs from all of Agnew's albums, including his excellent Christmas album, along with his contribution to a 2004 U2 tribute album and two new tracks. Reflection of Something is the most well-represented album with four tracks; How to be Loved and Need only boast one each, though "His Eye is on the Sparrow" was an unfinished holdover from Need.

Many familiar songs will sound a bit different to longtime fans. "Martyr's Song" is a version produced by Matt Bronleewe from a CD Single included with Ted Dekker's book of the same title. The single edit opens with the children's choir a cappella chorus and bolsters the strings. The song remains an Agnew standout, and is an opportunity to own an otherwise rare remix. "On a Corner in Memphis" is presented here as a songwriting demo, and the Marc Cohn homage in the outro alone is worth the price of the album. Agnew delivers the vocals on the remixed "This is All I Have to Give," replacing Vince Lichlyter's from the concept Christmas album, a wise choice since a guest vocal wouldn't have made much sense on a compilation.

The biggest change to any of the songs is the long journey of "Beautiful." Agnew recorded it for 2005's Reflection of Something, but shortly thereafter its songwriter, MercyMe's Nathan Cochran, asked if Agnew would consider not using the song, as Cochran had been offered a record deal and they wanted to use the song. It appears on Cochran's side band Diving Blind's debut EP. Agnew had become attached to the track he'd cut for the song, so he wrote new lyrics in what became "Unchanging One." Now, he finally gets to share the original song, which is decidedly grittier than Cochran's take.

The new songs complement the collection nicely, and it's good to hear from Agnew again after five years. The opener is one of those Todd Agnew songs that sounds like what you'd get if Fernando Ortega grew up in Memphis. It's also informed by his recent studies in theology. "Nearer Home" expands the musical palette, and is a mature recollection befitting this stage in the artist's life.

Agnew is like many artists in that his most well-known songs ("Grace Like Rain," "This Fragile Breath (The Thunder Song)", "Our Great God") are not necessarily his best and are not fully indicative of his repertoire. Consequently, From Grace to Glory is an excellent introduction to his music for casual listeners, and the fresh takes on several catalog songs will please longtime fans. Agnew's songs give voice to unexpected participants in the story of faith, and they do it with an honesty that fits his deep, earnest vocals. This collection captures some powerful musical moments, and should give some welcome esteem to an underappreciated artist.