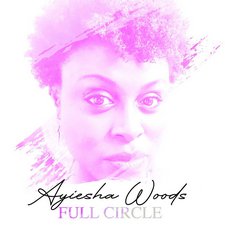 
Eclectic-pop musician Ayiesha Woods is no stranger to the music scene. She has been around since the release of her award-winning 2004 independent album, What You Do To Me. After catching the ear of TobyMac and signing with Gotee Records, she released two pop albums containing radio hits Happy and Enough from Introducing Ayiesha Woods in 2006. A second album, titled Love Like This, followed in 2008, and then as her career was taking off, she went on hiatus to start a family. Taking a break to start a family for nearly a decade was a risk for her career (and an admirable one at that), thankfully, Ayiesha got the itch to record music once again, albeit the independent route. On her own label, Woods dropped a full-length album in 2014, following that up with a seven-song EP in 2017. After teasing new music with the single "Family" back in April of 2020, Woods adds five all-new tunes to the mix in an EP titled Full Circle.

The EP starts off on a strong note with the poppy "Never," kicking things off with a high energy tune and a seriously catchy song. "If You Say" slows things down to offer up some mid-tempo praise. It's a pleasant track, but the next two are where Ayiesha hits her stride. Beginning with the exceptional love song duet "Safe," showcasing her husband J Hill. Within the song, both of their rich vocals weave and move around one another like longtime dance partners, also blending beautifully in harmony, all set to airy music replete with finger snaps.

Then, in a great bit of song sequencing, we get an uptempo reggae-infused number called G.O.A.L.S," featuring TobyMac, the ever-present and apparently ageless godfather of Christian hip-pop. Seriously though, radio programmers need to snap this song up and spin it into their rotation ASAP. There's a driving piano with a tasty horn section blasting out in the chorus, adding bombast that fits the song's swagger perfectly. Truth be told, Toby adds a bit of flair here and there as he is wont to do, but Ayiesha steals her own show with reggae rapping that would make Christafari proud. Its definitely a standout on the album and had me reaching for the repeat button.

While "Indebted" and the previously released ode to family, aptly called "Family," round out the tracklist nicely, they never quite reach the bar set by the two preceding songs. "Indebted" does return to the vertical lyrics utilized in "If You Say," using a familiar sentiment, though certainly, a heartfelt one as Woods sings of a willingness to say and go wherever called because she is "indebted" to God. The previously released Family is sweet in all the right ways and a fine way to close things out. Overall, this is a fine re-introduction to Ayiesha Woods, whose rich vocals and authentic joy shine through these six songs that will surely bring a smile to the face of longtime fans and new listeners alike. Woods has indeed come full circle, and CCM radio would do well to take notice.