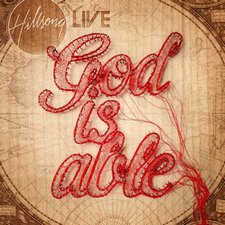 Few people can really comprehend the dynasty that is Hillsong. They are able to put out album after album and garner more and more attention while not really altering their sound. However, recently they've been making some obvious changes. With Hillsong United's latest release, they tried some different takes on what the world recognizes as worship music. Does this trend continue onto God is Able? The ultimate decision belongs to the listener, but here's what I think...

The album opens with the building "Rise." Normally I would expect to hear the classic "thumpthumpthump" of a fast song within the first 10 seconds, but this time we are given a mid-tempo song that builds and builds. While it is a considerably long at over 6 minutes, it's a very effective opener as United front man, Joel Houston, proclaims that it's time for the Church to rise. The album continues with this mid-tempo feel for the first half of God Is Able. "The Lost Are Found" delivers the most different approach sonically with a delayed electric guitar and string section. The song carries a mellow feel for a majority of the track with beautiful lyrics about the Lord drawing people to Himself. It concludes with a very epic bridge as the Hillsong team and the crowd sing, "The lost are found, the blind will see, the lame will walk, the dead will live, and You our God, forever You will reign!" Even after the song seems to have ended the crowd continues to sing. Normally live albums can't capture these kinds of moments; I think this one did. When the crowd takes over, it becomes so much bigger than a worship service. It crosses the line into something heavenly.

The transition is seamless into the title track, "God is Able." While not the most original sounding track that Hillsong has put out, it is an incredibly encouraging song as it declares that God is with us. After this we are finally given two very upbeat and fast-paced songs with "The Difference," featuring worship leader J.D, and "Alive in Us," with worship legend Darlene Zschech. Musically, they don't offer anything that we haven't heard before, but it gives the album some life and is one of the reasons Hillsong continues to gain new listeners. However, the final track "The Cry of the Broken" is hands down one of the more impactful and different songs that Hillsong has produced in years. It begins with a gorgeous duet of piano and strings. The song points to our gratefulness to the Lord, but instead of sounding like typical happy praise and worship, it carries the feel of a lament. In my opinion, that makes it more honest and gives some weight to what the worship leader is singing.

So does the beautiful trend of different worship music, started by Aftermath, continue onto the newest Hillsong? Not really. While I'm able to point out the positive elements of the album, the rest of it doesn't really carry anything new. Some of the songs mentioned really are great, but three good songs out of eleven can't make up the difference nor should it. A large majority of the album feels like filler songs rather than something with sustenance. I know that during a worship service that that is not the case; the people behind those songs are truly worshiping the creator of the universe. But that's not what we are critiquing; we have to critique the music (the album as a whole, not just message or music). So, Hillsong fans, if you are hoping for Aftermath: Part 2, sadly, you will not find it here. If you want the album that won you over a few years ago - you've got it and you'll notice that it hasn't changed.

God Is Able is the next installment in the live worship album series by the Hillsong entity. It's the follow up to last year's oddly successful A Beautiful Exchange. Why is that odd, you ask? Hasn't every Hillsong album thus far been a successful album? Yeah, pretty much. The reason I find it odd is because every year, album after album, nothing changes. I really had a glimmer of hope when Hillsong United released Aftermath and displayed a surprising bit of maturity in both musicianship and lyricism (and by lyricism, I mean the art of writing lyrics, not the message behind them). I was hoping that the main Hillsong worship team had taken the same route and would display some growth on their end. Sadly, this is not the case. God Is Able is another clone album. The melodies, the lyrics, the music patterns - it's all been done before, by this band and by several others. From the slow, female-led ballad "Unending Love" to the pop rock, cheesy anthem "The Difference," it's just the same thing as before. Heck, even the album's artwork is on the unoriginal side of the spectrum (check out the cover of Starflyer 59's My Island). The only Hillsong staple that seems to be missing from God Is Able is the extremely long, nine-to-ten minute songs (though "The Lost Are Found" clocks in at just over eight minutes, the majority of them are respectable three-to-six minute tracks). I guess one improvement per decade may help in the long run. Overall, listening to the songs God Is Able offers up just makes me feel like I'm listening to songs that Hillsong has written and recorded over the past few years. And that's when I'm not struggling to actually sit through an entire listen of the album. I realize their goal is to write songs that people can use to enter into worship, and that Hillsong's music isn't really meant as entertainment, but as long as they're putting their songs onto albums for which they're charging the worshippers money to obtain, they need to grow and mature in their sound artistically. - Scott Fryberger, 7/10/11