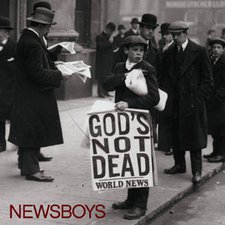 Throughout the Newsboys' history, the band has always kept an even balance between fun-loving excitement and reverent worship in their musical expertise. Even besides their two worship albums (2003's Adoration: the Worship Album and the following year's Devotion), the band has always included at least one or two songs of vertical praise on each album throughout their discography. Ever since Michael Tait began his tenure as the Newsboys' lead singer, the band has released quite a bit of music in a relatively short period of time, not to mention a very wide variety; this is evidenced by a Christmas project just last year and, most recently, this November's God's Not Dead: the Newsboys' third worship album to date.

Worship albums are such fickle products to analyze. At worst, attempts at these projects can come off as misguided and only exist to rake in cash for the label, and this only makes the best projects of this sort more valuable and, unfortunately, more rare. God's Not Dead falls somewhere in the middle of this spectrum; some tracks are very well realized, while others feel tacked on and less inspired. Most of the selections are comprised of currently-popular worship songs with "Your Love Never Fails," "Forever Reign," "Revelation Song," and "Mighty To Save" being prime examples (though it is disappointing to see the band recycle the latter track for this album when it released only a year ago).

Using the same sound that fueled Born Again, the pop rock sensibilities are never in short supply. The Newsboys attempt to breathe new life into these songs that have been heard countless times, though there's only so much they can do to make them fresh. With the sleek guitars and smooth pop vibe, it does succeed at creating a very modern-sounding worship project, but whether it really improves the songs isn't necessarily clear. When all's said and done, God's Not Dead is probably the best product from the latest incarnation of the Newsboys from a musical standpoint, but more original tracks written by the band would make the album feel more genuinely like a classic Newsboys project and not just a slew of covers with a poppy streak-free shine.

Thanks to the songwriting talents of Jason Ingram, Jared Anderson and Me In Motion's Seth Mosley, the new songs here are also fine additions. "Here We Stand" serves as a testament to God's majesty, while "All The Way" stands to carry on the mission. The real crowning achievements of God's Not Dead, however, are found in the anthemic opener "The King Is Coming," the blazing title track (better known as "Like A Lion"), and the bold closer "I Am Second." The latter two tracks also feature guest vocals from former dc Talker Kevin Max. All shock aside that Max is appearing alongside Michael Tait on a Newsboys album, his inclusion fits the songs perfectly and adds an extra dimension to improve their overall effect.

Whether or not one has embraced the Newsboys' new sound after these past couple years, the band certainly sticks to it and delivers a worship record that's unmistakably their handiwork. The song choices work for their purposes, and there's enough variety throughout that the album indeed feels complete. It's all shined up and polished, but it may be this very fact that keeps God's Not Dead from feeling especially endearing. Taking a few more chances may be the Newsboys' key to unlocking their true potential, because that's the band that everyone will come to know and love best. All notwithstanding, God's Not Dead does far more right than wrong, and is still well worth looking into for any worship fan.

God's Not Dead is a nice, shiny-yet-sincere worship effort from Newsboys. With some well chosen worship covers played in the energetic, slightly dancy Newsboys style, God's Not Dead transitions well from last year's Born Again album that introduced the melding of veteran CCM vocalist Michael Tait with the core musicians of the Newsboys.

"Make A Way," "God's Not Dead (Like A Lion)" and "Your Love Never Fails" form a nice opening salvo for the album, and are thankfully a few "left of center" worship covers that are not yet overly-familiar. The record also ends well, with the nice slow build of the powerful "All The Way" and the muscular "I Am Second," which feels like the cousin of the title track from Born Again. Ending a worship album with its best rocker is a great change from the tendency to slow things down at the closing. And the additional vocals of Michael Tait's longtime friend Kevin Max are a nice cherry on top of this sundae.

However, with the choice of doing a worship covers album, where even the original songs here are written by a team of songwriters "Backstreet Boys style," are the current Newsboys roster in danger of morphing from an "artist" to an "act?" In performing others' material while calling it their own, they accept a Nashville tradition that goes back many years, but does not seem fitting for a longtime songwriting force that the band once was. Surely a group of music veterans like this have a few songs still left in them. - Review date: 11/14/11, written by Tincan Caldwell of Jesusfreakhideout.com