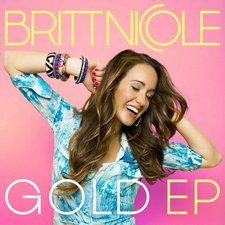 With Britt Nicole being signed to Capitol Records now, they've decided to re-release her album Gold, which was originally released in March of 2012 under Sparrow Records. With the re-release due out February 26th, they've released a digital EP, appropriately titled Gold EP as a prelude to the full-length. This EP includes the original version of her song "Gold" with two new rexies of it. The song "Gold" itself is filled with postive and uplifting lyrics, like "Whatever you've been told, you're worth more than gold. So hold your head up high, it's your time to shine. From the inside out it shows, you're worth more than gold." This song can really help a lot of people who struggle with their self worth with lyrics like that.

The original version of "Gold" has a great beat and rap section that make it a great dance track, so with the new remixes included here, you can probably expect the same thing. And that is exactly what you get. The "Jason Nevins Remix" has even more of a dance beat to it than the original, and it includes dubstep flavored breakdowns. This remix is very catchy so you may find yourself singing it long after having listened to it. However, in this version, the rap section is left out which makes it feel flat at the end of the song.

The "Wideboys Remix" keeps the rap section and is probably the better of the two remixes. This remix also includes dubstep breakdowns but it also has a great pop sounding piano intro. Altogether, this is a fairly good EP, and if this type of music is what we have to look forward to from Britt Nicole, I think we'll be hearing a lot more from her for a very long time!