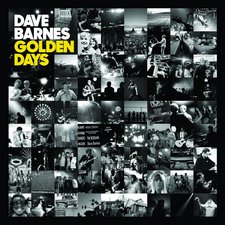 Dave Barnes has followed a career path that is all too familiar for many present day artists. He broke onto the scene in 2010 with the smash hit "God Gave Me You," which was later covered by country legend Blake Shelton and nominated for a Grammy. Lightning failed to strike twice however, and Barnes released a follow-up album, Stories to Tell, which failed to get much attention despite being more than worthy. Now he finds himself releasing his sixth studio album independent of a record label.

Golden Days is in some ways a continuation of trends for Barnes, but in other ways, it is more adventurous than his previous albums. This exploratory nature is both a hit and a miss. It begins with "Twenty-Three," a song clearly aimed straight for pop radio. It's a fun upbeat track, but it sounds just a little too produced and calculating, even including several sing-along "oh oh oh" moments in the chorus that seem forced. "Loving Los Angeles" is another fairly poppy track, but more in the vein of Barnes' typical singer-songwriter style. It comes across as more sincere and has a more pleasing melody as well.

"Good" is the unquestioned highlight of the album, and one of Barnes' best songs from any release. It has a slight Andrew Peterson vibe to it, with a gentle piano line leading the way, but also a hint of the country influence Barnes tends to inject into his music. The lyrics are compellingly sincere and vulnerable, with Barnes singing, "Everything I've done heaven has seen, and God just keeps on forgiving me," and then in the chorus, "It's so good. I got more than I ever thought I would. I can finally see how all the wrong turns and the heartaches, the lessons and the mistakes, help me count these blessings like I should." It's classic Dave Barnes vulnerability and intimacy, and it helps to elevate the whole album.

The near perfection of "Good" is unfortunately balanced somewhat by the album's biggest miss, "Little Civil War." It features Barnes dialoguing with a female vocalist about the inevitable disagreement and bickering in a marriage and the equally inevitable making up afterwards. It has a bit of swagger to it and is clearly supposed to be playful, however both the melody and the lead guitar line are too plain to make the song work. It sounds like a worthy attempt, but nevertheless one that didn't quite pan out.

Fortunately, the majority of the album is a lot of fun. "Something More" is a clever upbeat track with just the slightest island vibe to it, which is something new from Barnes. In many ways, it succeeds where "Twenty-Three" doesn't, with a catchy tune and the right instrumentation to back it up. "Can't She Try" is a boatload of fun, with a heavy dose of the strong disco influences that regularly pop up on Dave Barnes albums. "Sharon Sue" is a pleasant romantic song, and "Hotel Keys" is another refreshingly honest track where Barnes relates the struggles he's had as a musician over the eleven years he's been making music. The only other possible negative is "Heartbroken Down," which doesn't have any glaring flaws but isn't compelling enough to be anything other than album filler.

Dave Barnes has created a nice stylistic niche for himself, but he clearly isn't afraid to venture out a little bit. Perhaps his newfound independence is to blame for that. This wandering has created a couple of less than stellar tracks, but the remainder and majority of Golden Days is as excellent as any longtime fan would have expected. All told, it's hard to deny that Dave Barnes releases great albums with a consistency that's rarely matched in the industry today.