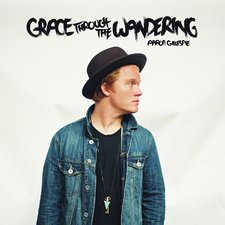 Aaron Gillespie
Grace Through The Wandering

Aaron Gillespie is renowned for his former days in Underoath and pretty widely respected for his current band, The Almost. Gillespie is a little less known when it comes to his solo worship music though. Grace Through the Wandering is Gillespie's second worship album and follows 2011's Anthem Song. Personally, I found Anthem Song to be a somewhat refreshing take on a very stagnant and over-populated "genre." Gillespie brought some of his edge from The Almost and mixed it with some of the standard fare you'd expect from a worship music pioneer like Jeff Deyo; it sounded a bit "old school" in a sense. Overall, the results received mixed reviews from a critical standpoint. And while several of the songs from Anthem Song made it into my church's worship rotation, it seems that Christian radio didn't pick up on the rocker's vibe.

Grace Through the Wandering now has Gillespie taking another shot at a worship release. It's quite evident that worship is a large part of Aaron's lifestyle and he wishes to use his musical talents to worship his Creator. Gillespie takes a different approach this time around though. Instead of using his own style as a platform, he borrows more from what's popular on radio today. The reason for the change-up is unknown, but the sound is evident. Many of the driving beats behind Anthem Song have been replaced by Chris Tomlin-like licks. In fact, beyond the opener, "Wake Us Up," and to a much lesser degree, "Praise Him," there are no fast-paced worship anthems. While Anthem Song was chock-full of driving and faced paced songs, nothing really comes close to "All Things," "Hosanna," "We Were Made For You," or "Anthem Song" this time out. The songs also seem to share a much brighter sound overall with less use of minor tones and keys.

The aforementioned "Wake Us Up" is a definite stand-out, but other noteworthy tracks include: "All That He Says I Am," "You Alone Are God," and "Give Us Your Heart." In contrast, "Hold Me Close," an electronic based song, becomes a quick skip. The poppy sound and overly repeated line, "Hold me close," (repeated about 14 times in each chorus, counting the additional "me close" repeats) are just a little too much to bear. From a musical standpoint, the track doesn't really fit in with the rest of the album and the drum fills are a bit overkill and distracting. Possibly the most interesting number here is Gillespie's cover of the classic hymn "Come Thou Fount." The song has been done several times in the past few years, but Gillespie's down-south treatment of the song makes it shine above other covers. The track carries the sound from The Almost's southern inspired Fear Inside Our Bones.

There are ups and downs throughout Grace Through the Wandering, and in the end, it seems to be an aptly named album. It feels like Aaron is wandering about, trying to nail down the sound he wants for his worship ventures, but this time he seems unwilling to commit to anything certain. The record is far from a bad listen, but it just seems to be missing something. Whether it's more continuity, or just something else musically, the album feels like it needs more. Hopefully, Grace Through the Wandering is a sign of Aaron Gillespie's growth as a musician as he continues to tackle different musical styles. This record shouldn't discourage you from buying the next album he releases, but I wouldn't be surprised if it didn't make you want to go back and listen to Anthem Song again. If you're looking for a Spirit-filled worship album by a talented musician, look no further. If you want something a little more original and different, you're going to want to keep looking.

A tenured musician and songwriter, BEC Recordings' Aaron Gillespie has been making music for nearly twenty years, spanning two full-time bands and one solo career. Since 2011, he has been releasing his own albums full of worship music, in addition to his duties fronting pop rock outfit The Almost. While not particularly impressive, Gillespie's worship albums have made a bit of an impression on listeners, and after three years, his next album is here. From the outside, Grace Through The Wandering, with its album title and even the cover art, may give you the impression that Gillespie has gone into some sort of a folky indie pop style (like something you might get from All Sons & Daughters or Preson Phillips), but alas, it's mostly songs that are barely distinguishable from the typical fare. That being said, "Give Us Your Heart" does break away a little bit, with music that resembles The Ember Days and Ascend the Hill, and "Hold Me Close" brings in some electronic flair, but also contains a super repetitive hook that got old very quickly. And, if I may be a little nitpicky, Gillespie's vocals irk me from time to time, and I'm really not fond of the restructuring of the melody in the album closer, "Come Thou Fount." Now, with THAT being said, the songs are very encouraging. One particular favorite is "All That He Says I Am," which is an uplifting song to remind the listener that what God says is always truth, and that all the loving, wonderful things He says about us are obviously true. "You Alone Are God" is another that ends up being rather enjoyable that I could find myself returning to. Grace Through The Wandering is a much-needed improvement to Gillespie's solo career, but, ultimately, it's still not a strong release. There are a few gems, but you have to dig through the rough to find them. - Review date: 2/1/15, Scott Fryberger