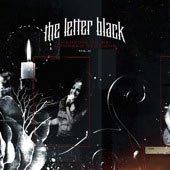 The Letter Black
Hanging on by a Thread Sessions, Volume 2 EP

The Letter Black returns with the second installment of their three-EP series. This EP follows the same format as the first, offering one hit single, a remix, two new tracks, and a track from their out-of-print Breaking The Silence EP.

The single chosen is the hit title track of their debut album. It's a worthy song, but it's available elsewhere. "Away From Me," from their BTS EP, is an average rocker. If a fan has both of these songs, purchasing the entire EP is unnecessary unless a hard copy is obtainable (Of course, if you don't have any of the songs yet and like what you hear, by all means, get the entire EP).

The remix is of "Moving On" amps the song up a bit and actually improves slightly on the original. The new tracks here are "Better Luck Next Time" and "Somebody To Love." Neither of these are very surprising offerings from the band, with the former being easily comparable to many songs from their debut. The latter offers a slightly different sound for the band but it too is ultimately a predictable, if enjoyable, listen. Still, the tracks are worthy enough to purchase if one is a fan of the band.

If you didn't like The Letter Black before, this will surely not change your opinion, and will probably even reinforce views on the band's averageness. But if you enjoyed their offerings thus far, such as myself, then I'd recommend hitting up Amazon or iTunes for the new tracks. They're average but well done. The band might want to experiment more on subsequent releases, but for now, the new tracks can serve as enjoyable additions to playlists that have already welcomed The Letter Black.