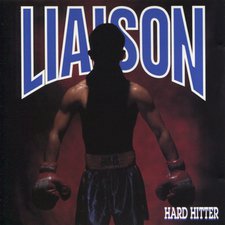 
In 1989, Liaison entered the thriving world of Christian hair bands. Taking cues from fellow artists like Guardian and Whitecross, brothers Tim and Larry Melby unleashed their gravelly voices and wailing guitars for 3 studio albums. The culmination of these was 1992's Hard Hitter. The group pulled out all the stops, bringing in other artists like Oz Fox (Stryper) and Tony Palacios (Guardian) to bolster the sound. In 2020, Girder Records had the album (and its predecessors) remastered to a more modern standard, putting a little-known band back in the spotlight.

From the Rocky-inspired look of the cover to the title, one would get the impression that this is a heavy rock album. One would not be disappointed. There are plenty of heavy guitars present to deliver crunchy riffs and face-melting solos. The drums pound their way through the speakers and the bass isn't far behind. Of course, the remaster treatment makes it feel all the more crisp. While undoubtedly the guest artists helped make the music more interesting, credit should be given to the Melbys for coming up with some tasty riffs and memorable melodies.

As far as the message goes, it nails the "hard hitting" aspect as well. Some of the tracks are more on the encouraging side for Christians to stand strong against the effects of the world (like the title track, "Attitude," or "My God is a Rock"). The two ballads go for a softer, evangelistic appeal ("Who Can Heal the Pain" and "As Far As the East is from the West"). Most of the tracks, however, go after the listener tempted with sin. Tracks like "Steal, Kill, and Destroy," "Whatsoever You Sow," and "Wicked Ways" all warn of how sin leads to a hellish end. While this emphasis is good and balanced out by those evangelistic songs, it nevertheless feels a little overdone at times or playing into the stereotype that a lot of people have about late '80s/early '90s conservative Christianity. For instance, "Steal, Kill, and Destroy" begins by blaming a movie for introducing bad doctrine into one's life. There can be some truth to this, but it does feel like low-hanging fruit to swing at.

For this reviewer, Liaison was a new name. Guardian, Whitecross, and Stryper are all familiar acts, so reviewing this record feels like a dip into CCM history that is less explored. It's an enjoyable album, mostly in its music and less in its lyrics. Fans of the band will likely want to hear this remastered version, but for those unaware of this band's existence yet who love this era of Christian rock, Hard Hitter is a worthwhile listen.