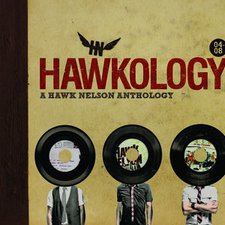 
Hawk Nelson, in my mind, were the best Christian punk group out there, hailing from the Toronto area. Obviously, since 2012-13 with line-up changes, they weren't the same band and they started down the more pop-centric stylistic road, but, they were still Hawk Nelson.

This CD set includes the first 3 albums in this band's career as signed artists.

The first album Aaron Sprinkle (Kutless, Anberlin, Demon Hunter and countless other bands) produced, Letters To The President, was an outstanding debut release, though only peaking at 35 on the US Christian Charts. The entire album was written by the Hawk boys and Thousand Foot Krutch's Trevor McNevan, who helps with the band's material up until the end of the Jason Dunn era. The top songs on this disc would be the title track, "Right Here," "Take Me," and "Like a Racecar." To sum up the album without saying too much, it's a great release but could benefit from some maturing in the sound.

In 2006, Hawk Nelson released Smile, It's The End Of The World, their best release in my mind, using their Sum 41, Green Day and Blink-182 influences but still sounding like Hawk Nelson, and without the vulgarity of most secular punk bands. This is also the last Aaron Sprinkle-produced Hawk Nelson album. Line-up changes are also here, too, with Dave Clark (Guitar) and Matt Paige (Drums) exiting, and Jonathan Steingard (Guitar) and Aaron Tosti (drums) joining. The album starts off with the Sum 41-influenced "The One Thing I Have Left," serving as a great start to the album, and I feel like it was their best punk/alternative song. The Album charted at 75 on Billboard 200, with three songs peaking in the Top 20 on US Christian and Christian Airplay charts. The record also was nominated for Rock Album of the Year at the 2007 GMA'S. The best songs are "The One Thing I Have Left," "Everything You Ever Wanted," "Zero," and "Head-On Collision."

2008 brought Hawk Nelson Is My Friend, a solid response to their sophomore record. Once again, but certainly not for the last time, line-up changes struck again, this time Aaron Tosti exchanged for Justin Benner. The album opens with another Sum 41 influenced song, "You Have What I Need." Next is the highly Blink-182 influenced track, "Friend Like That." The record also has a surprising co-writer, Raine Maida of the band Our Lady Peace. Hawk Nelson Is My Friend was the most successful album from the boys, peaking on Billboard 200 at 34, number one on Top Christian Albums Chart, 13 on Billboard US Rock, and 10 on US Alternative charts. Only one of its four singles made it to the Top 20 on Christian charts, "Friend Like That." The top songs are "You Have What I Need," "Friend Like That," and "Somebody Else."

This anthology is top-notch Hawk Nelson fare and is worth the price if you can find it. One thing that is different from the individual albums is that Letters To The President has been remastered to be louder; when bought on iTunes the original album is quieter than the anthology version. Other than that, nothing else is different. If I could nitpick at one thing, it would be why not add the Live Life Loud album (2009) with this release (2010).

If you are a Hawk Nelson fan since the beginning, you probably won't need this, but if you have gotten into Hawk Nelson recently and you want to pick up their early works, before original vocalist Jason Dunn left and guitarist Jon Steingard took over as lead vocalist, then this your buy.

Disc One: Letters To The President

Disc Two: Smile, It's The End Of The World