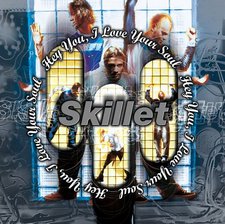 Skillet
Hey You, I Love Your Soul


Skillet debuted ferociously in 1996 with their grunge-influenced self-titled album on Forefront Records. Skillet's sophomore release, themed for showing love to the lost even when faced with opposition, Hey You, I Love Your Soul, doesn't exactly pick up where their debut left off. Needless to say, I was in for quite a shock when I first popped in the record for a listen.

Upon hearing the album's first track, it's clear Skillet has already reinvented themselves on just their second outing. The title song starts out with electronic beeps and boops that will quickly confuse anyone familiar with the band's previous effort. But the new Skillet mixes rock with electronic elements for a unique industrial feel that you might expect more so from Code Of Ethics or Mortal - not the grunge band Skillet. After more listens, I was pleasantly surprised. The new style is sort of a hybrid of Audio Adrenaline and Code of Ethics, all the while remaining distinctively Skillet. Those familiar with mainstream music will agree there is a hint of Nine Inch Nails in the mix as well.

While the band's debut may have drawn some comparisons to Nirvana, it still possessed that "if it ain't broke, don't fix it" rock authority. And while grunge may be fading, it still seems an extreme shift to adopt such a thick electronic influence. But Hey You, I Love Your Soul has plenty of good things about it. Highlights include the rocker "Locked in a Cage," while fans of the old ballads "Saturn" or "Safe With You" will enjoy "More Faithful," "Whirlwind," and the almost tribal sounds of "Coming Down." Hey You, I Love Your Soul may be a completely different musical exploration for this three piece, but hey, it sounds good!