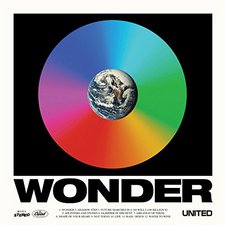 
As music critics, we understand how difficult artistic excellence is to achieve, especially in a genre that's meant to be widely accessible. Balancing both artistic quality and congregational reverence is no small feat, and despite what opinions one may have of the famed megachurch, Hillsong United has achieved just that in its past three releases. From the creativity of Zion's electronic base to the somber, synth-led Empires, and even to the earthy acoustics on Of Dirt and Grace, United has proven themselves as veterans of their craft. On Wonder, the band attempts to meld everything they have accomplished into one colorful collection.

Standing as a contrast to Empires's darker aesthetic, the title track introduces the listener to a bright, synthy anthem that shows how beautiful our planet is in the face of the despair and disaster we see around us. It's an explosive opener that never ceases to build upon each note. "Shadow Step" follows in a slightly more subdued manner, carried by the strong vocals of Taya Smith. The track features some of the band's best writing yet as its lyrics reveal a profound truth that God is always before us, even when we feel we're alone, "You never left the lost forsaken, your mercy paves the road ahead / Unexpected / You are always good /Tracing all my steps."

The gentle plucking of the guitar precedes the delightful "So Will I (100 Billion X)." Instead of simply observing the wonders of God's creation as someone apart from it all, the song delicately reminds us that everything creation does is an act of worship and we too should join its praise, "And as you speak a hundred billion galaxies are born / In the vapor of your breath the planets form / If the stars were made to worship so will I / I can see your heart in everything you made / Every burning star signal fire and grace / If creation sings your praises so will I." Numerous moments throughout the record showcase the band's melodic strength and this is especially notable in the bridge of "Greatest of These," where Taya takes the lead vocal to deliver a gorgeous, lullaby-esq verse.

For all its strengths, Wonder, unfortunately, carries a number of weaknesses as well. Monotony is found in spades in "Shape of Your Heart," a cut carried by autotuned vocals and a melody that never quite reaches fruition. The writing isn't always top-notch in tracks such as "Not Today," "Future Marches In" and "Life," the latter of which drifts aimlessly until its second half. Finally, the album doesn't contain enough variance to keep the listener invested until the end. Closer "Water Into Wine" clocks in at nearly ten minutes, but its musical direction offers nothing to justify its runtime, opting to create a cliched slow and steady one-note build.

Wonder is undoubtedly another strong release from the folks in United, but I would be lying if I said I'm not concerned about the direction of their next project. Despite possessing a strong ear for melody and poetic lyricism, the creative evolution between Empires and this is sparse, to say the least. It's not enough to sufficiently hurt the album or even keep it from the spotlight, but signs of a creative recession are evident here. With that said, Wonder comes highly recommended for fans of worship music daring to reach for artistic quality, just don't be surprised if it leaves you wondering about what could have been.

Hillsong United's Wonder is both a welcome surprise release and a confounding example of a band struggling to break out of a formulaic songwriting rut. With a few exceptions (like the terrific title track), the songs here struggle to distinguish themselves from one another, with similar slow-burn openings and sluggish rhythmic structures. The opening trio of songs break the mold a bit, with sharper time signatures and beats, but most of the songs after that fail to break the 70 beats-per-minute mark, making the middle-to-end of the album sleepy in comparison. And this is a shame, because Wonder is full of terrific lyrics and fresh takes on what constitutes a "worship" song. The opening title track is the most interesting and energetic thing on the album, and shows the band at their inspirational and upbeat best. In a challenge to believers to truly be captured by the wonder of life and faith around them (as opposed to the consternation and anxiety expressed by many believers in this last election year), the song is an anthem in all the right kinds of ways. The following "Shadow Step" uses a unique metaphor for following the Savior closely (being in shadow step with what He is doing). "Splinters And Stones" likewise offers a unique perspective on the cross and what it cost Jesus to "carry all my shame." "So Will I (100 Billion X)" features a great, all-encompassing view of creation, and has a Psalm-like quality to the lyrics.

So it's a shame that the lyrical, musical and vocal talents of the band are not put to use in the service of songs that have energy. The musical build in "So Will I (100 Billion x)" would suggest that the song is about to explode, but the apex of the song never reaches the heights of the lyrics, with a muted climax that leaves the listener wanting more. With a bit more energy and a willingness to shake up the formula a bit, Hillsong United would have had a spectacular and epic album. As it is presently constituted, Wonder shows promise, but fails to deliver a whole batch of songs with body and character. Here's hoping that the band amps up the energy next time around. - 6/19/17, Alex Caldwell of Jesusfreakhideout.com

Hillsong United's yearly release, titled Wonder, is both frustratingly paced and boring musically, and brilliantly poetic lyrically. After multiple listens, it all begins to lull and sound like one long song, which is a shame because the lyrics deserve closer attention. The best of the bunch are songs "Shadow Steps," "Splinters and Stones" and "Glimmer in the Dust." - 6/10/17 Josh Balogh