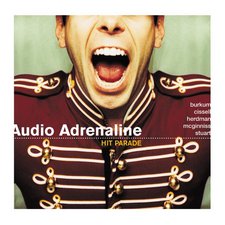 As I usually say, greatest hits projects are touchy areas. Fans have their own stance on what the best songs by an artist really are. While projects like Smash Hits by All Star United and The Best of Bride by Bride contain some great songs but tend to miss the mark, collections like Intermission by dc Talk and Hit Parade by Audio Adrenaline feature undoubtedly the best from the artists, not holding back even recent hits from their latest albums, and even throwing in a couple new cuts as if 15 of the best wasn't enough.

So here, I'm talking about the pop/rock five-some Audio Adrenaline who's greatest hits project, Hit Parade is just that. The album has little flaw in this collection, and the two new cuts fit in perfectly as new hits. Some oldies are tweaked a bit, as dc Talk did on Intermission. "Big House" adds a few seconds to an interlude, "We're a Band" tosses in music in a normally silent section of the song, "Rest Easy" adds a slight backdrop and alters a section of the tune while "Mighty Good Leader" flows smoothly into "Some Kind of Zombie" as opposed to normally "Underdog."

The only song I'm not yet convinced fits, is the inclusion of the Underdog album version of "DC-10." It's rockabilly-swing format was done as a fun tribute to the original Audio A song and I was shocked to find it released here. The one song that definitely was missing in its place was the title cut from their 1993 album, Don't Censor Me. Aside from this minor setback, the album is strong, runs smoothly, and is a magnificent collection of AA favorites.

The two new tracks, "Will Not Fade" and "One Like You" are superb additions. With strong lyrics and a rough musical edge like that of their 1996 album bloOm, the songs feel right at home here. "Will Not Fade" rocks harder along the lines of "It's Over" or "I'm Not the King," while "One Like You" is more like a stripped-down version of "Never Gonna Be as Big as Jesus" or "Get Down." Both show a considerable amount of maturity in Mark Stuart's voice as he's gotten older. Musically, the songs are pretty tight, as well.

One of the best and most solid collections I've heard yet, Hit Parade is a must-have for Audio fans and certainly a good sampler for new listeners of the band.