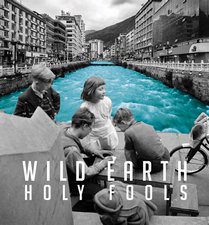 
Indie worship band Wild Earth has returned with the follow up to their 2014 Come & Live release, Orchestrate (which is available for free on their bandcamp page). Intriguingly titled Holy Fools, their sophomore album continues their exploration of a variety of styles and boasts unwavering vertically-focused lyrics. With this level of experimentation, there is always a risk of lacking cohesion or not fully "owning" a particular style, but the band pulls off the diversity like pros.

Now independent, the band (or more accurately, duo) is comprised of Micah Bentley on vocals, Jason Richard on guitar, and studio musicians. Bentley's vocals are arguably the most distinct aspect of the band's sound, drawing comparisons to Colton Dixon and Mitch Parks from After Edmund. The lyrics are another distinct attribute, with intelligent but straightforward songwriting. The lyrics do tend to stick a little too close to familiarity in terms of messages and metaphors, but the delivery feels more authentic than the vast majority of worship music that comes through the pipeline.

The somber opener "Gardens" expands on the theme of "Destroyer" from their previous album: "You deconstruct my hiding place to build an endless giving fountain / Turning old ruins into gardens / softening ground that once was hardened." There is a muffled vocal effect over Bentley's voice that adds to the reflectiveness of the song, but one criticism is that the first chorus has a piercing, high-pitched feedback while he sings "I am undone." Thankfully, this is not an indication of recording problems down the road.

"Of Peace" follows as a minor highlight, picking up the pace a bit and offering a catchy chorus that would be well-suited for a youth group gathering. For "As One," the band channels their inner-Tomlin for what is the most radio-friendly and corporate worship-ready song of the bunch. "Clothed" stands in contrast to "As One" with chest-pounding synths. The retro-sounding "Be Still" is a highlight with its clever re-phrasing of Psalm 46:10: "be still and know that I am I Am." Bentley stretches himself vocally on "Be Still" with great use of falsetto.

Most of the tracks here are solid, but a couple are less memorable, like "What We Become" and "Ways" (though listened to individually they are fine tracks). The aptly titled closer, "Amen," is somewhat forgettable for the first half of the song, but the second half of "Amen" introduces some distorted power chords as it proceeds to conclude the album with the doxology "Praise God, from Whom All Blessings Flow." While overused among Christian artists, this doxology does work well for the band (and at least they actually used it to close the album--looking at you, Stars Go Dim).

With so many worship and indie rock bands out there, you really need to be memorable to stand out. Does Holy Fools do this? Yes, for the most part. The music is creative and the choruses are singable. It is a great choice for anyone that likes indie music with worshipful lyrics.