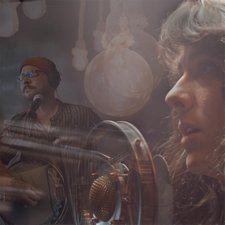 
We are seeing a resurgence of hymns in the church today. While the exact definition of a hymn is up for debate (and no, it doesn't simply mean an old church song), bands like Sovereign Grace and CityAlight are proving that this battle-worn vessel, which has been the go-to in the church since nigh its existence, can more then survive the modern age of backing tracks and mile-long bridges.

Enter Middle River Hymnal, formed by worship-leading duo Josh Diaz and Laura Creel, who recorded their spin on five classic hymns for their church in Fort Lauderdale during last years social distancing. Providentially, the hymns patterned nicely into a playlist for this year's Holy Week.

The duo's tapered bluegrass style is fairly unique, combining back-porch plucked guitar, worn-down spinets, banjo, and swelling harmonies, along with some surprising trumpets to add stateliness to the sound. Joshs voice reminded me of Tenth Avenue Norths Mike Donehey, while Lauras whispered, reverberated head voice brought to mind Brandi Carlile, and the voices play off each other nicely throughout the live recording.

The duo does well to let the songs sit when needed, then layering in dynamic verse upon verse, a necessity seeing the rather simplistic format of hymns. These hymns are well-known to congregants, so opting for a minimalist approach is wise, yet perhaps a bit too unassuming. In other words, go into this playlist ready to sing along to classic hymns with subtle changes, such as the 6/8 time signatures in Great Is Thy Faithfulness and How Great Thou Art, but don't expect a massive reworking. In fact, the biggest change is the duos southern style itself. The 19th century closer Were You There proved to be the highlight here, both by being the most on the nose in regards to Good Friday and Easter, as well as building the strongest by rotating lead singers between verses, and a sparkling horn interlude.

This little playlist is a good introduction to Middle River Hymnal. The sound is in place, and they clearly have chemistry formed by almost a decade of leading worship together. I'll be looking forward to some original content in the future to help springboard them into the center of the modern hymn movement.