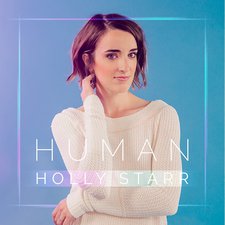 
Singer/songwriter, Holly Starr, is following up the release of 2015's Everything I Need with another seven-song EP, titled Human. Starr has shown her capability as a songwriter on past releases and I'm happy to say that is no different here. Human is a solid pop offering birthed from a wide range of life experiences.

The musical palette of Human is pure dance-pop, sampling influences from the urban bent of Hollyn ("Run The Race") and the electronic direction of Matthew Parker ("Say Yes"), who also co-produced the record along with David Thulin and Bryan Fowler. For the most part, Starr pulls off this sound really well, as on the toe-tapping "Umbrella" and the excellent title track, which reminds the listener that our flaws and mistakes are what make us human and aren't meant to be shamed upon. "What if mistakes aren't such a bad thing? / What if they make you who you are? / What is a story with no struggle? / You can't see the stars without the dark / Maybe we could never be perfect people and maybe that's ok?" The EP closes out in a wonderfully somber and intimate way with "Sailing." Inspired by the recent death of her grandmother, "Sailing" is a beautiful ode to life and perseverance and quite easily the best song here.

What holds Human back isn't the lyrics or even the production (which can admittedly sound a little dry at times), but the music itself. The songs lack a strong hook and, for a pop album, this becomes quite a setback. A couple of tracks simply come and go without leaving any defining spark ("Bruises" and "You and I" being the most uninteresting examples), even though it's clear they do try.

For what it is, Human is another solid effort from a singer/songwriter that deserves more attention than what she's received. For the most part, it's an enjoyable, if somewhat vanilla, release. There isn't anything particularly memorable here, but if you enjoy pop music to any extent give it a spin some time. You may be surprised.