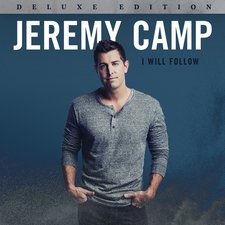 Twelve years ago, Jeremy Camp was introduced to us as a down to earth young man that just endured the tragic loss of his first wife. The lyrics he wrote and the fervency in which he sang them resonated with simple yet profound truths of God's grace and mercy. Over the years, the passion and vulnerability in his voice and songwriting declined and his instrumentation became more predictable, with Reckless hitting an all-time ordinary two years ago. I Will Follow is a step back in the right direction, but it still contains some of these same problems.

I Will Follow is first and foremost a declaration of the grace and love of God. This is a relevant and important message, but there are two main problems with the lyrics Camp uses to convey this message. The first problem is that many of the lyrics are safe and one-dimensional. For example, on "We Are The Dreamers," several unrelated buzz words are crammed together in the chorus: "We are the dreamers, all things are possible / You are Redeemer, You're working miracles / Let's rise, rise, rise to our feet, and proclaim the name of Jesus." The second problem is that most of the songs repeat the track title more times than necessary (for instance, "Only In You" recites the phrase "only in you" 19 times). Though repetition can be used artistically, in cases like this, it just seems lazy.

That's not to say all the lyrics are a bust. There are a few moments, like the worshipful "Here I Am," the encouraging "He Knows," and the first verse of "Christ In Me," that all start to show some depth. Additionally, Camp sings with a lot more emotion and conviction than on Reckless or We Cry Out, which helps offset some of the weak lyrics. This is evident from the first song, "Living Word," where Camp packs a lot of gusto into his words, giving them a bit more weight: "It's alive in me / The very breath I breathe / I'm holding on with all I've got / To the living word, the living word of God." He even tries his hand at some falsetto in the chorus of "Finally Home," which works surprisingly well for his brawny voice.

From a musical standpoint, there are several songs that follow a similar format to each other, including "Christ In Me," "'Till The End," and "We Are The Dreamers." These songs feature a memorable sing-along chorus accompanied by big drums, an overabundance of oh-oh's/hey's, and vocals that are mixed too prominently over the rest of the music. Admittedly, many of these tracks are really catchy, but their calculated nature hinders any potential staying power. There are some songs that stand apart, like the southern rock title track, the joyful "Finally Home," and the boot-stomping "Can't Be Moved," but even these tracks have an unimaginative song structure. Other smaller musical bright spots include the industrial drum beat on "Here I Am" and the acoustic guitar picking on "Only In You."

The deluxe edition offers three b-sides and two acoustic renditions. "Spirit Now" and "Perfect Love" fit right in with the rest of the album, and though they are also enjoyable, they have the same flaws as the songs on the regular edition. The best of the three b-sides, "Be Still," takes a slower approach than the rest of the album but contains an uninteresting false ending which hurts its replay value. The two acoustic tracks are exactly what one would expect: the same exact song as the original with an acoustic guitar, softer instruments, and dominating vocals.

Jeremy Camp has a big heart for God and one of the stronger voices on Christian radio, but the lackluster lyrics and unoriginal musical formula drag this album down. That's not to say this is a bad album--in its weakest moments I Will Follow is average and in its best moments it is enjoyable. If anything, this album gives a glimmer of hope that Camp still has another album of the same quality as his earlier works up his sleeves, but as we wait for that day to come, I Will Follow should only be picked up by those who really love Camp.

In an industry where veritable hordes of artists (Third Day, Kutless, Newsboys) have, slowly but surely, traded in their once-gritty, harder-rocking inclinations for decidedly softer, worship-themed fare, Jeremy Camp's latest effort seems destined to slot in alongside the radio-ready lite pop currently being offered by those artists and others of their ilk. While Camp's own transformation from pop/rock to kinder, gentler fare is hardly a liability, in and of itself, his last few efforts have fallen particularly susceptible to a certain undistinguished aesthetic that, unfortunately, shrouds his latest release as well. To be sure, lumbering mid-tempo rhythms, all-too-clean production and lack of solid hooks and melodies render the better portion of I Will Follow a pleasant, but ultimately unremarkable, affair. Indeed, even after having listened to the album several times all the way through, many a listener will still find it hard to hum any of the songs - too many of which sound nearly alike - from memory.

To his credit, Camp does shake off his lite-pop bent on songs like the neo-Country-inflected "Can't Be Moved" and the bluesy Southern Gospel-tinged title cut, but even those tracks come across as more awkward than convincing and pale next to classic early-period Camp chestnuts like "Walk by Faith," "Lay Down My Pride" and "Stay." Camp's latest effort is hardly unpleasant and, thanks to his distinctive and still-powerful voice, it still ranks slightly higher than the bulk of that which currently all but rules the Christian pop Top 40. That said, having heard his first few albums and knowing what he's capable of, it's hard not to look at his latest undertaking, amiable and ostensibly sincere as it is, as simply a lesser cousin to his superior early works. - Review date: 2/6/15, Bert Gangl