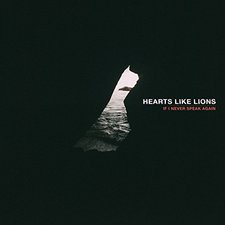 
Tooth & Nail Records has signed a great many number of bands over its nigh twenty-five years of existence. And with so many artists, there were bound to be some duds, for lack of a better term. A few years ago, the label signed a few new artists that seemed exciting at the time; New Empire released a decent album and then broke up, Midnight Alive released a forgettable album and then switched labels, and Hearts Like Lions released a promising EP and then went silent. Their dropping from the label seemed pretty likely. But this year, we're finally treated to a full-length album from the Californian fourpiece, and I, for one, am glad they stuck around.

Cut from the same cloth as bands like Abel and My Epic (with bits and pieces of The Almost and Mae sewed on), Hearts Like Lions' brand of indie pop rock is infectious, though a bit more toned-down than some of these bands. In fact, there are some moments on If I Never Speak Again where it feels like the band has made an attempt to subdue themselves when a louder, slightly more intense sound would've been appropriate and very welcome; songs like "Let On" and "If I Never Speak Again" come to mind, as do certain portions of "Thank You Very Little." However, that ends up being the worst of the criticisms, and the lower intensity level does work for the band, even when the core of the song is a driving rock number like "Pretty Little Phase."

One of the album's highlights is a song called "Get This Through." The hook features a very welcoming melody while Stephen Ramos sings to an non-specified person, encouraging him or her to search deeper in their lives for something that keeps going unnoticed ("There's a message you're not receving, and you'll lose all self-control, think of all the good things, and remember you have hope"). Different songs come with different meanings, with no sort of specific theme to pick up. "Opportunities" is a song to someone long gone, and seems to be more about regret than anything else, but the title track leaves the listener to reflect on making every moment matter. Near the end of the song, Ramos asks a lot of questions, starting with, "If you told me that I would never speak again, what would I say? What would I do? Could I hear my voice? Would you understand? Would I get it back?" and ending with finality, singing, "And I'll say I'm sorry, and yes I'll mean it everyday." Though it's written and sung in a personal sense, it's something great to take away as the album concludes.

If I Never Speak Again is an album that shows that, not only is this band still a good fit for T&N, but also that they are a very talented bunch of musicians with a keen songwriting ability. Somewhat ironically, If I Never Speak Again actually speaks volumes of Hearts Like Lions. The guys will be on tour with some big names this year, including semi-labelmates The Ongoing Concept, so here's hoping that this will only keep their momentum going. But even if it doesn't, I don't think we'll be hearing the last of Hearts Like Lions anytime soon.

Hearts Like Lions signed to Tooth and Nail Records and released their These Hands EP way back in 2014. I was impressed by the EP, but had basically forgotten about the band -- and then suddenly, If I Never Speak Again was on the horizon. Stephen Ramos, the vocal equivalent of a cross between Aaron Gillespie and Jim Adkins (Jimmy Eat World), leads his band through a rock record that interestingly enough sounds like a the musical equivalent of a cross between The Almost and Jimmy Eat World. Their newest record takes what was good about their short introduction EP and makes it better. While listening through the album, you get the Gillespie/The Almost vibe from tracks like "You're On Your Own," "Get This Through," or "Thank You Very Little," while the Jimmy Eat World sound comes through much stronger on songs "It's Not Gonna Be This Way," "Pretty Little Phase," and "Make Your Move." It even almost feels like HLL walks the line between the more raucous The Almost and more restrained Jimmy Eat World; it's a curious dynamic to say the least. Overall, If I Never Speak Again holds up well against Tooth and Nail's legacy of great indie-type rock bands. HLL fit the mold and their debut album is a really great listen from front to back. They offer a comfortable sound we've heard before, but the infectious nature of the songs is undeniable. It took a long time, but Hearts Like Lions have released an album worthy of applause. I think most of us could agree that we'd rather wait over two years for a fantastic album instead of just over a year for an album that feels rushed or half-hearted. Thankfully, we were treated to the first scenario in this case. - 3/9/17, Michael Weaver of Jesusfreakhideout.com

After releasing a solid debut EP back in 2014, California natives Hearts Like Lions fell silent. Now they've seemed to come out of nowhere to release a surprisingly great album, entitled If I Never Speak Again. The album brings to mind a sound resembling The Almost, Mae, and the lesser known From Indian Lakes. The quasi-emo lyrical stylings, subdued instrumentation, and undeniably infectious choruses all come together seamlessly. Highlights include "It's Not Going To Be This Way," "Pretty Little Phase," and "Make Your Move," a song with equally poignant lyrics. A small criticism would be that the album isn't anything excessively unique and feels at times like they're trying to sound like too many Tooth and Nail bands at once. But considering the quality of most T & N bands, that's not necessarily a bad thing. Overall, the band seems to be figuring out their nuanced sound quite well, and any fan of T & N or rock in general would be remiss if they passed this one up. - 3/25/17, Dylan O'Connor