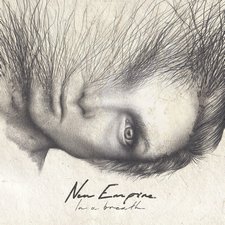 New Empire
In A Breath

The start of 2014 brought some international flavor to the Tooth & Nail Records roster, with the addition of New Empire from Sydney, Australia. It also brought some much needed attention to a group of guys whose popularity has steadily been increasing over the years. Formed in 2005, the band has experienced the majority of their success in their native land of Australia, playing with the likes of The Almost, Owl City, Relient K, Switchfoot, Casting Crowns and Hillsong United at major national festivals and tours. Their song "One Heart/Million Voices," was even the theme song of the 2012 Summer Olympics on Australian TV. Until now though, their impact in the United States has been limited. All of that is about to change and there's really only one question remaining: what took so long?

New Empire takes the pop sensibilities of bands like Copeland, and combines them with the softer side of Hyland and Acceptance. In other words, they don't just create power ballads; they're a power ballad band. Imagine one of the most relaxing, yet dense, albums and that's In a Breath. A lot of times, songs like these make an impact because of the way that they contrast with the rest of an album. They're soft, and everything else is loud so the difference makes you pay attention. But here, each song is powerful in its own way. There's a lot of subtle and not-so-subtle spiritual imagery, ranging from the opener, "Tale of Jonah," to the electrifying single, "Relight the Fire." When frontman Jeremy Fowler sings about his faults and his struggles, it's not only accessible, but uplifting. No matter what you're going through, there's something that can touch your heart with In A Breath, and it's not just the message but the music as well.

Musically, In a Breath seems simple on the surface, but it's actually quite complicated. Layers of guitars and keys are balanced by just enough drum work, and even horns at times, making for an understated, yet beautiful collection of songs. The instrumentation complements the message in such a way that it's clear that the band is not only talented, but experienced. Dynamically, some of the album's best moments are its softest, and it's in these times that New Empire shines the brightest.

While New Empire has been around for years, In a Breath marks an impressive debut on the international stage for one of the most promising bands in Christian music today.

After gaining considerable success in Australia, Tooth & Nail's latest addition is set to put out their American debut with In A Breath. The appeal of New Empire is not hard to see; melodic alternative rock in a similar vein of Copeland or Mae, but with the pop sensibilities of Imagine Dragons combined with the CCM draw of MercyMe. One only need hear a song like "Relight The Fire" or "The Sun Won't Sleep" to draw them into their sound. New Empire is in their element on In A Breath as they pull on the listener's melodic sensibilities, and combined with their lyrical themes of longing and hope, it creates an emo-like musical effect (though to describe their music as emo would not be entirely accurate). In a way, this album is a little genius; the sound is not unfamiliar to almost any audience, it appeals to a wide variety of fan bases, but is unique enough in its own right that it won't put off many listeners as simply "same-old same-old." Unfortunately, where New Empire loses points on In A Breath is that they really are kind of a one-trick pony. It's not necessarily that each of their songs sound the same or follows a similar structure, but that they don't have a whole lot of variance in their sound. Each song is melodic pop-rock with an indie flair, sometimes with some electronic elements thrown in, and aside from a somewhat uncomfortable rap on "Left Behind," lead vocalist Jeremy Fowler (in spite of his smooth and appealing voice) doesn't show a lot of versatility. It certainly works for one album, but their next album needs more flavor lest it be a clone of this one. On the other hand, In A Breath is a without doubt a great starting point for New Empire's venture into the realm of American Christian music, and it is easy to get excited about their potential. - Review date: 4/28/14, Mark Rice

Given the current mega-success of indie pop acts like Imagine Dragons and Bastille, it comes as no surprise that there would be an influx of bands making the same style of music. Tooth & Nail's latest signing, New Empire, is one of them, and the label is saying they're for fans of bands like The Killers, Neon Trees, and Paper Route. Label debut In A Breath draws a lot of influence from these types of bands, but puts their own touch on it. Unfortunately, their own touch is basically of the Air-1/K-LOVE AC pop rock sort, which gives it one of those "Christian version of [insert aforementioned band]" stigmas. There are some occasions where this isn't entirely the case ("Fallen Soldiers" and "Left Behind" do touch on that Paper Route sound a little), but those occasions are few. In A Breath is worth a listen, but it's not as exciting a release as it's being touted. - 4/9/14, Scott Fryberger of Jesusfreakhideout.com