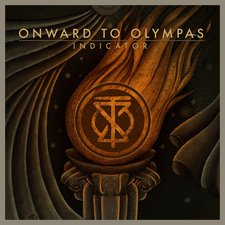 Two years after their debut album with Facedown Records, Onward To Olympas is back with album number three (yes, three albums in a two year span). The name of the album is Indicator, and it shows some impressive growth that fans have been able to notice over the last two albums. These guys have been pretty solid so far, and I think Indicator is their best yet.

For those who have been following Onward To Olympas' Facedown career, you will notice that Indicator doesn't stray too far from the path they forged thus far. They provide the listener with powerful guitars with ample chugging, double bass and blast beats, and a smart mixture of screams, growls, and clean vocals in just about every song. One of the best examples of this is the song "Strange Forest," as it's one of the shortest tracks, and you get all of those aspects in just over a two-minute time span. It's a formula that has worked for them before, so they wisely use it again here, though the clean vocals do seem more abundant this time around. It's refreshing to see the band stay true to themselves while showing noticeable signs of growth and evolution as they take on a more melodic approach to their thrashy ways. Resident singer, Kyle Phillips, even gets his own track on which to shine, "Breakthrough." The song is a lot like what Underoath usually sounded like when Aaron Gillespie fronted one of their softer songs, though the guitars are more akin to something you would hear from Abel. "Breakthrough" doesn't last long, but with honest lyrics like "I'm just a product of liars, lovers and thieves, one testimony of how far grace can reach," it's great while it does.

Honest lyrics are a key feature in Onward To Olympas's songwriting. Case in point, the opening verse of the song "Circles & Illusions," where we're greeted with the concept of poor decision-making: "I need You to take me somewhere that I long to be, because I know that I am letting this whole place get to me, I'm so sick of letting myself fall into this weakness." It's safe to say that those are very relatable lyrics for every Christian (or even every person who has struggled with feelings of guilt). The focus stays on Christ, though, as the answer to our problems. This rings true later on in the song "Division," which says: "So I reach out for guidance to pull me through the storm, I'm done with keeping my head buried, no more sleeping with eyes wide."

The one negative thing that I really have to say about Indicator is that I think it followed The War Within Us a bit too closely. As I mentioned earlier, since signing to Facedown, Onward To Olympas has released an album each year. Though signs of improvement are noticeable with each new album, which is a very good thing, the improvements have only been marginal, and the overall sound doesn't change all that much. In essence, it almost feels like they're releasing a different form of the same album over and over again, without taking the time in between albums to stretch themselves a little more. These guys are good, don't get me wrong, but taking a little more time before immediately writing their next album could prove to increase their sound and artistry and maybe experiment a little more for the next go-around.

All this being said, Onward To Olympas have another solid hardcore album in Indicator. As the band progresses, they will surely keep improving for as long as they wish to exist as Onward To Olympas. Again, I think more time in between albums would do them well, but even without that, they're more than capable of producing fine hardcore music full of quality and substance. Fans of their previous work should pick this up, as well as anyone looking for something new and heavy.