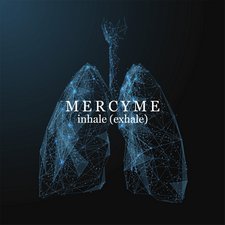 
Safe-ingenuity may sound like an oxymoron, but the boys in MercyMe have made a living off it. In fact, I would argue the reason for their perpetual relevance in the CCM scene is not because they break the mold, but simply because they fill it with better stuff than most. Their latest effort, Inhale (Exhale), sticks close to their radio-pop roots and leans heavily on founder Bart Millard's signature turns of phrase. Like much of their previous discography, Inhale focuses on composure in the hard times, the believer's future hope, and grace for the in-between. These are not worship songs, nor are they necessarily even God-directed; instead, Millard speaks as a wise counselor, giving the good advice of a tried-and-true friend.

The tiny title-track whet my appetite for the rest of the album, as it has what's been missing from recent Christian pop; ingenuity. With a witty line along with a La La Land jazz vibe (to be precise), Millard sings, "No chain can hold what's already free/so hold on to Jesus and breathe." This sixteen-song album is lifted when mulling over the lyrics, as they're chock-full of these clever phrases that, while covering well-trodden ground, somehow manage to feel fresh. I was also pleasantly surprised to hear electronic elements sprinkled throughout, whether it be slight auto-tune, sampled harmonies, or electronic drums. Because they're well-executed and not overused, this adds distinctiveness and something exciting to the otherwise fairly normal sound.

The first half of the album, beginning with the swampy-rocker "Blessed," is up-tempo and happy, just toeing the line of being hokey, but Millard's one-liners keep it just grounded enough. "On Our Way" is the premier of Millard's son on writing and vocals, but unfortunately the song is pretty "blah" overall. "So Yesterday" is probably the best of this opening bunch, with its electric energy and regeneration language borrowed from the book of Ezekiel, "that was so yesterday/but I've moved on/now I finally have a heart of love where once was stone." Another strong track is the funky "Whiplash" that has a familiar theme (especially for this band) about letting go of your past, but the image of getting whiplash is both original and fun, "Don't act like you've forgotten something/like you done left behind a friend/the only friend you need/is the One who don't care where you've been."

Starting the second half with the touching "Bright Side Of Broken," we see Millard's lyrical maturity on full display. On the song, he self-awarely uses cliches to describe depression, then returns to the album's breathing motif to reassure us that "What we see as a broken mess/Jesus sees a chance to be made whole/life's not over yet/so take a breath/cause it gets better." The short-and-sweet "The Moment" authentically details Millard's testimony to a laid-back country-shuffle that blends perfectly. Another bright spot is the cheerleading "Almost Home" with its escalating bridge that echoes 1 Corinthians 15 and encourages believers to press on while anxiously awaiting future glory, "I know that the cross has brought heaven to us/but make no mistake there's still more to come/when our flesh and our bone are no longer between/where we are right now and where we're meant to be."

The only real swings-and-misses are the stale "A Little Love" and "Let Yourself Be Loved." The latter tropes around the modern doctrine of "self-love" and misapplies it to Jesus' *selfless* teaching of "love your neighbor as yourself," effectively turning our Lord's teaching on its head. Thankfully, this is the only song that struggles lyrically, as even the video-game-ready "Uh Oh (Here I Go)" manages to sneak in an ironic quip, "Until you learn to trust you will not jump/I've always told myself/but from up here it's clear that trusting is the leap itself." This tune's stark, Beach-Boys-esque bridge was unexpected and just plain fun. One other quibble is that the music often stays on the safe side. Lead single "Say I Won't" has a solid message, but the chorus melody is flat, and the song as a whole doesn't have the firepower of the band's previous hits. Also, while there are many musical genres represented, making for a seemingly engaging experience, the songs within these styles are not very creative, making songs like "Brand New," "Blessed," and "Whiplash" seem like just a token of their prescribed genres.

Though this record probably goes a song or two long and has its musical flaws, the lyrical input continues to be fresh and thought-provoking. Each song is littered with encouraging commentary that makes this a worthwhile listen for anyone needing a spiritual pick-me-up. Fans of the band, or Christian radio as a whole, will undoubtedly enjoy this album, though it doesn't do anything musically groundbreaking. For now, MercyMe seems content to simply offer Christ's hope for trying times while helping you enjoy the ride, and in that regard, Inhale (Exhale) shines.