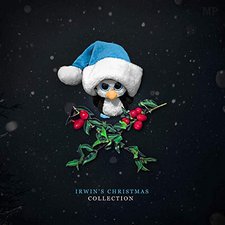 
Some EPs, like their full-album counterparts, are constructed as cohesive, self-contained artistic statements. Others serve to alert fans of a given artist or group that their favorite performer is soon to deliver new music and function as a sampler for that music. As it turns out, Matthew Parker's latest extended player, Irwin's Christmas Collection, winds up falling into neither of those two categories, which seems only fitting given its contents.

Offering a Christmas-themed grab bag of sorts, Parker kicks things off with "Mistletoe Meltdown," a light-hearted dance-pop ditty detailing his great-aunt Betty's attempts to corner him under said greenery. The equally humorous follow-on cut, "The 12 Days of Christmas," bears the parenthetical subtitle "How It Should be," and such is arguably the case. To be sure, it's hard to find too much fault with a track that trims the lengthy December chestnut down to a quick intro speech followed by the last of the song's twelve verses and a few concluding remarks - the sum total of which run a mere 38 seconds.

Like "12 Days," the "Cyborg Santa" remix of "Carol of the Bells" adheres fairly closely to the original composition's basic melody line. Unfortunately, though, the sum total of the latter number's EDM-based bells and whistles end up distracting from, rather than enhancing, its underlying source material, especially toward the back end of the proceedings where things collapse into a somewhat amorphous wall of effects. That said, a healthy portion of the shortfalls suffered by the first three tracks is offset by the sweeping and reverent closer, "Kindle," which is far and away the release's most beautiful and poignant entry.

Viewed as roughly one third of an album proper, Irwin doesn't quite fit into the must-have category. Taken as a very solid single preceded by three lesser (albeit mostly engaging) bonus cuts, the EP's intrinsic appeal comes into a bit sharper focus. Whether or not the project is destined to appear on Christmas playlists ten years from now remains to be seen. As it stands now, though, Parker has provided his listeners with a generous helping of the joy, laughter and reflection that should be a part of any holiday celebration, which makes his latest undertaking - and "Kindle" in particular - an effort worthy of investigation.