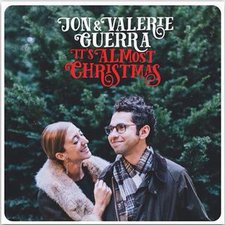 
Earlier this month, publicity released an article that had Jon and Valerie Guerra discussing their upcoming 2015 Christmas album with great anticipation. After all, It's Almost Christmas is a labor of love that stretches back to 2011, during the time when the couple's newlywed and economically-art-dependent status had proven to be an obstacle (since the holiday shopping season was approaching). The Guerras were quick to act and recorded a well-received seven-track EP in their Chicago apartment that featured the title track (then titled It's Almost Christmas, Chicago!) alongside their take on classics like "Let It Snow" and "Auld Lang Syne," in order to raise the money necessary to afford their loved ones the presents they desired. The tender history attached to this piece of work is no doubt a catalyst for the duo to celebrate 2015 with a re-imagining of that EP, this time with seven covers of Christmas classics and four original songs that are so well-crafted, I was surprised to find out they weren't already culturally-ingrained icons of audio.

Valerie was quoted as stating, "The project took on a life of its own, and it's literally been me, Jon, and a couple of close friends - no session players or producers - which adds to the sentimental, homespun feeling." Adding to that, the album was even recorded in the very living room of the artists where the original EP had taken place. However, it's apparent from the start that It's Almost Christmas is far from being a work where "homespun" and "sentimental" are the first definitions that come to mind. It is consistently too over-produced to instill any listener with the idea that this project came from a humble one-bedroom apartment, and not from a corporate-overseen team of producers and engineers that, instead, had it in mind to create a commercial and viable album. This, of course, is not meant to be taken as an insult in and of itself. The Guerras never miss a beat and the string/horn arrangements are relatively flawless, orchestrated with such precision and clarity that George Martin's work on the Beatles' early albums could be a reasonable comparison. However, to say that they succeeded in their endeavor to present to the world something which resembles their mission statement would be untrue; that being, "Ultimately, we wanted a sense of home' to come across in the music..."

Fortunately, where the Guerras fail could very well be where they truly excel and shine their brightest. In the scarce, original material scattered between the covers lie seeds that glow with great potential. Being fans of Sufjan Stevens, the track "Beginning To Feel Like Christmas" is characterized by the same cartoonish lyrics and grand orchestration that often follows the artist, but the Guerras don't indulge in the influence to the point where plagiarism replaces homage, giving us just a taste of the diversity of their influences outside of the all-too familiar CCM circuit. "Will I See You At Grandma's House?" paints a picture of a family longing for other members to arrive for Christmas, and those member's numerous excuses for being absent: feelings of inadequacy, distance, and the inevitable aging process and the issues that come along with it ("Everyone is growing up and none of us stay up as long as we used to"). It's an exceptionally emotional song flowing from exceptional songwriters, yet no song on this album comes close to the beauty that "Lord Remind Me" achieves. With its premise on the darker side of humanity, it's a call to remind us that Jesus' life and sacrifice is to be the light that gives us the hope and reason to why we gather together at the end of every year in love and joy. With quite the appropriate title, I'd even argue that it's possibly the strongest song Jon has ever written.

It's with this grand closer that the album ends, imbued with the rays of hope that Jesus gave us after His resurrection. 2015 has been a busy year for these two, especially considering Jon's album, Little Songs, released earlier this year to high critical acclaim and charting success. I applaud their efforts to give us another album amidst their busy schedule, but its bursts of genius are too sparse, overall presenting itself as an uninspired commercial effort despite being hand-knitted by a desire to invite us into a warm and familiar home. Instead of a fireplace, we are seated at an artificial heating vent which some might take comfort in but does nothing to quench the feeling of an impersonal ordeal. It's Almost Christmas might have more in common with the generic holiday selections you'll find in your local Starbucks targeted to suburban soccer moms on their fourth trip to the cafe this week than a groundbreaking year-end release, but someone has to do it and I'm just thankful it's in the loving hands of Jon and Valerie Guerra.