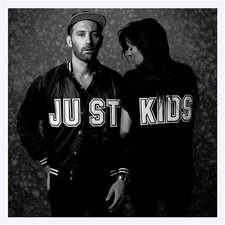 
As his sixth studio album, Just Kids finds Mat Kearney continuing to straddle the line of being a pop-inclined musician who still strives for the lyrical depth and intimacy of a singer-songwriter. This dichotomy actually works for the most part, and the end result is an album that as a whole is both more musically creative and lyrically sincere than his last release, Young Love.

While the acoustic guitar-strumming, quasi-rapping Mat Kearney of Bullet and Nothing Left to Lose is mostly gone, Just Kids is also not as blatantly pop-oriented as was Young Love. There are still several upbeat, radio-friendly tracks, but the production is more eclectic and there are notably fewer hand-clap rhythm sections. In fact, along with Kearney's typically heartfelt lyrics about his past and his romantic relationships, the production on Just Kids is one of the album's best attributes. For example, "Billion" could have been a fairly generic romantic pop track, but it is set apart by the fun world music feel of the production. This adventurous producing approach is visible on several other songs, including the title track, "One Heart," and "Heartbeat."

Lyrically, Kearney devotes significant time to subjects he's previously addressed on prior releases. He sings a lot about both successful ("Heartbeat" and "Billion") and unsuccessful ("Moving On" and "Ghosts") relationships, as well as his own history both as a child and as a performer ("One Black Sheep" and "Los Angeles"). Kearney definitely seems to have found a comfortable groove in terms of subject matter from album to album, and Just Kids doesn't branch out much from that. But the sincerity and lyrical creativity with which he approaches these topics keep the end result from seeming stale.

The biggest weakness of Just Kids is that it's heavily front-loaded in terms of energy. After "One Black Sheep," the second half of the album is generally much more low-key, which makes the album as a whole feel off-balance. Additionally, one of the few upbeat tracks in the latter half, "Los Angeles," is not particularly good, feeling like it has all the elements of a good Mat Kearney pop song but somehow managing to be less than the sum of its parts. The only other noticeably weak song is the title track, which attempts to strike a slow-burn tempo but ends up being more "slow" than "burn."

But any small criticism of individual songs pale in comparison to the quality of the album as a whole. Just Kids is by turns both fun and heartfelt, and it showcases an artist who continues to evolve his sound in new directions and who keeps a fun pop sensibility intact without simply pandering to the radio. Lyrical depth, clever production, and Kearney's impeccable sense of melody and hook all combine to make Just Kids an excellent example of a pop album done the right way, and it may be Kearney's best work since he first burst onto the scene.

Just Kids is, ironically, a chronicle of an artist who is all grown up. Historically, Kearney has been at his best when he's been autobiographical, and it seems he's told his story many times over. On his latest, though, his stories reflect a more profound sense of depth and symbolism. Even when his songs discuss events like the "Early Life" section of his Wikipedia page, he uses these events to convey rich emotion and admirable spiritual honesty. Speaking of emotion, there is a huge range on this album. Kearney is deft enough to pull off an ebullient love song like "Billion" in the same collection as a (forgive the adjective) haunting lament of loss like "Ghost." Sequencing the songs must have been a challenge, and listening straight through can feel a bit bipolar, but here's the thing: these are great songs. The pop hooks are as catchy as any Kearney's ever written, and the slower story-songs are close to majestic. The sparse "Shasta" shows off a falsetto that augments Kearney's versatility. "Heartbreak Dreamers" is the perfect setting to showcase slam poet Anis Mojgani's "Shake the Dust". And "Heartbeat" is synth-laden bliss. There just aren't many artists in Christian music like Kearney (B. Reith comes to mind, among few others). He can rap and sing without it feeling disjointed, and he can write pop songs with spiritual themes that never seem forced. He can drop names like Bell Biv Devoe, Wu-Tang Clan, and Amy Grant on the same album and it somehow makes perfect sense. He can also tell the story of Ecclesiastes in an anthem of encouragement that resonates with his eclectic base of listeners ("Let it Rain"). Kearney takes his time between releases, but if they're all as finely crafted as Just Kids, they'll be worth the wait. - Review date: 2/25/15, Mark D. Geil

Mat Kearney's music has seen a lot of exposure in the mainstream over the years, with songs making appearances on multiple soundtracks and in episodes of various television shows. And in 2015, he might just continue this trend with his fifth studio album, Just Kids. Simply put, this is one of his finest albums to date. The overarching theme is one of reflection on the past, as not only the lyrics talk a lot about his roots as an outsider and how his career got started, but he also does a bit of throwback to the sounds of his debut album, Bullet. I've always enjoyed hearing Kearney's pop-fueled rapping, and it sounds as good here as it ever has. Just Kids does have some slow moments here and there, but overall, I don't ever really find myself skipping over any tracks; it's a solid listen from start to finish, through the serious and heartbreaking songs, like "Ghost" and "The Conversation," to the fun and poppy songs, like "Billion" and - a personal favorite of mine - "Heartbeat," which reminds me of Phil Collins. Any fans of Mat Kearney's previous records will not want to miss out on this one. If you like good pop music, you'd do well to pick this up; make sure you're able to get your hands on the bonus track "The Air I Breathe," as it's one of the strongest tracks of the bunch. - 2/7/15, Scott Fryberger of Jesusfreakhideout.com

Delivering an alternative sound entwined with hints of folk music and hip hop, Mat Kearney has a certain appeal that most either love or hate. I can appreciate anyone who is trying to make a sound that's completely unique and unable to be compared with others, so I am digging what Mat has been doing for that last decade or so. Songs on his newest release, Just Kids, that definitely need to be added to your playlists are "Heartbreak Dreamers," "Just Kids," and "Los Angeles," all stellar tracks offering hints of soul music and personal experience. Sure, not everything here is good - most albums fall short of perfect - but If you like Mat's old stuff, you'll be into this one too. - 2/1/15, Kevin Hoskins of Jesusfreakhideout.com

Just Kids is what happens when pop and hip hop converge with the singer-songwriter in a beautiful collision. It has been a very long time (or at least it feels like a long time) since I have run across an album that was as simultaneously catchy and intimate as Mat Kearney's long-awaited follow-up to Young Love. Starting off with the captivating "Heartbreak Dreamers," Kearney puts on full display his penchant for hiding meaningful lyrics in plain sight under some delicious beats. This trend continues with "Moving On" and the title track, before two of Kearney's most fun and memorable songs, the love anthems "Heartbeat" and "Billion," steal the show. The album puts up a very good fight to maintain the momentum it's built up to this point, but while the song quality remains high (particularly "One Black Sheep," "Miss You," and the haunting "The Conversation"), it struggles to push through to the end while maintaining the listener's full attention. That lagging is the only real downfall in what is otherwise Kearney's most intimate and rewarding album yet. - 3/2/15, Mark Rice of Jesusfreakhideout.com