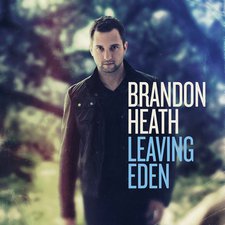 When you've got a year's second most played radio single to your name, there's much that can be expected for the future. "Give Me Your Eyes," one of the biggest Christian radio hits of the last decade, took Brandon Heath from a lesser-known singer/songwriter status to Christian music staple, and for fans of both the song and the artist alike, Leaving Eden was earnestly awaited, and the result leaves few surprises behind.

From a commercial standpoint, Leaving Eden is nothing but a home run. Taking a cue from the style of the most successful song of Heath's career, this is a much more produced record than his previous work, and given who the target audience is, it triumphs. "Leaving Eden" is especially comparable to "Give Me Your Eyes," as it follows a very similar style using people-watching skills to convey the message of the world's falseness ("I just waved to a stranger, he didn't wave back.../teacher is hiding her Bible, but at least she's got a job/my local Salvation Army just got robbed"). The simple upbeat hip-hop drum style found in adult contemporary music is preserved all the way through (as well as some unfortunate auto-tune usage), especially with tracks like the already-runaway-hit "Your Love," "The Light In Me," "Might Just Save Your Life," plus others. Basic themes in Leaving Eden include recognition of Christ's contagious sovereignty in the believer ("The Light In Me"), the captivating power of Christ's love ("Stolen"), and the Christian's ability to make a difference in their world ("The One"). Most material here is pretty typical of Heath's songwriting technique - straightforward while leaving room for art to shine through, though not terribly profound.

While the acoustic-driven approach has been forsaken for a more produced pop style, some tracks opt for the organic approach characteristic of Heath, namely "Only Water," "It's Alright" and "As Long As I'm Here." Maybe it's the stripped back stuff that Heath is best at, because these tracks are some of the strongest of the set. The arguably best track on Leaving Eden, "Only Water," uses the element as a chief compound of Jesus' work, leading to a highly effective and moving song ("And it washes over me, like a single river's stone, changes everything, but has no power on its own, it's only water".) Usually, ballads are thrown in the mix to change up the album's variety, but because they sound the most like Heath's original approach, they seem strikingly more accomplished in their execution.

Listeners have to take in Leaving Eden with certain expectations. Recognizing the success radio-friendly material has brought him thus far, this feels like the natural next step in Heath's career for it to continue to thrive and sell records. As a result, this isn't a boundary-breaking release, but it's far from a miss. Joining the ranks of artists such as Tenth Avenue North, Leeland, and The Afters as the best of what Christian radio has to offer, Heath keeps things somewhat fresh but pulls no punches. Leaving Eden may not be destined to be hailed as a masterpiece by the year's end, but it's full of truthful optimism that will stick around on the radio long into 2011 and beyond.