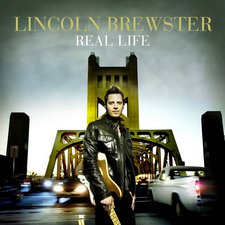 
Coming off his 2008 release Today Is The Day, Lincoln Brewster released Real Life, a 10-track outing which passionately speaks of the way God has worked in Lincoln's life. Even though Brewster doesn't necessarily break much new ground here from a musical standpoint, lyrically he steps outside what he has done in the past, which is a good step forward.

The album opens up with the upbeat "Best Days," which looks to the future hope of being in heaven for eternity. This is followed up by the equally cheerful "Reaching For You," which was certainly written with the church in mind. It isn't until we get to the title track that we see some real lyrical growth. "Real Life" is one of Brewster's most honest songs to date. The song itself takes more of a country route, and the lyrics are destined to tug at your heartstrings: "When I'm old and turning gray / And my boys have moved away / When it's time for me to say goodbye / I hope I leave a legacy / I hope that God is proud of me / I hope that I leave something good behind." The next two tracks pick up the upbeat vibe again, with both including some of Lincoln's signature guitar shredding. The album slows down again for the next few songs, before ending on the anthemic "Shout For Joy," which takes a bit more of an orchestral pop/rock approach, ending the album on a solid note.

Overall, Lincoln has created another solid set of pop-rock worship songs, and surprisingly showed some real lyrical growth in songs like "Real Life" and "Made For More." Those looking for his face-melting solos will definitely be satisfied, but Lincoln balances those perfectly with slower tracks, such as "Loved By You" and "More Than Amazing." For a Brewster fan, this is definitely something you should pick up - and if you haven't heard of him before, you may want to give this album a spin.