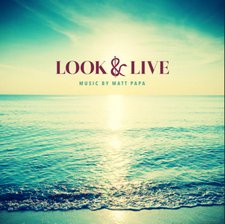 Matt Papa has become a staple in worship music these days with a handful of good albums released over the past seven years. His most recent album brought us the amazing track "It Is Finished." Look And Live is Matt's latest project and like many artists today, he's going the independent route for its release.

The album seems to be broken into three sections with the first handful of songs being simply wonderful worship tunes. "All For Your Glory" is a great introduction, beautifully detailing creation, mankind's fall, and our true purpose to live for Him. "The Ocean" is filled with wondrous content of our sufficient Savior with words like "These are scattered beams, but You are the bright sun. These are shallow streams, but You are the ocean." Starting around track six, the shift changes into a unique and pointed direction of Christ's death and resurrection. "The Crucible of God (Gethsemane)" carries haunting touches, and "The Song Of An Angel" has a more rock feel with good energy while telling an amazing story. That being said, the other tracks in that portion of the album are just fair. Despite having a good purpose, they lack something to make them stand out.

The last third of Look And Live doesn't seem to have as much of a purpose as the beginning of the album. Rather, it contains a few more songs that make me want a little more. "Bigger Than Me" tries to be radio-ready rock, but fails, while "At the Brothel Door" seems far too simple lyrically in light of the song's title. However, ending Look And Live are two personal and stellar songs. "A Pilgrims Progress (Keep Runnin)" speaks the powerful message of living for Christ, and the final track cries out "this world is not enough for me. All I want is You Jesus," making the perfect ending for a solid worship album. Not only are the worship songs good lyrically, but Matt has a knack for adding enough creative music elements to make each song have its own particular flair. And while I think a few tracks could have been omitted, Look And Live is still a worthy album to be owned by lovers of worship, and fans of Matt Papa certainly won't be disappointed.