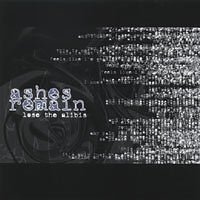 
Lose the Alibis is Ashes Remain's debut 2003 album. While it was just their very first released project, it was better than most bands' second or third release. Although not all of the songs are equally good, some songs are totally worth highlighting and discussing.

The album kicks off with "Fade Away," an intermediately paced song. The happy sounding instrumentals truly complement the soft and light vocals. The song deals with God's presence in our lives. It conveys to us that God is always there, whether we've just reached the top of the mountain, or whether we're falling off of it. The third track, "After All This," has a beautiful piano intro. The crisp tone quality of the acoustic guitar brings the song to life and sets one's emotions in motion. One might consider it a good song to raise the lighter and sway to. That soul uplifting song, eventually, leads to the fourth song, "So Far." With the intro vocals and bass giving it a retro essence, the song suddenly jumps into rock-mode before the beginning of the first verse. The beats and rock riff complement each other, as if they were ripe oranges and apples in one basket. "Cry Out" is another soft and soul uplifting song, very similar to "After All This." The lyrics have been written very artistically; for example, "Just push aside the raging tide, And Lose the Alibis." The beautifully written lyrics leave very little to complain about.

Overall, this album is beyond just average. The tracks showcase a spectrum of emotions, including happiness, sadness, and hope. However, a few missing emotions would be rage and fire. While this was just a debut album, and there were no expectations, it would've been good to see those few missing emotions included in the album as well. The reason of those missing emotions could be the fact that the album is focused on a soft rock sound. Screaming vocals seems to have been avoided in every song where there was good potential for screaming, like "Cry Out."

In conclusion, I would say that Lose the Alibis is a decent rock album, and fans might find it a good idea to recommend this album to family, friends and other loved ones.