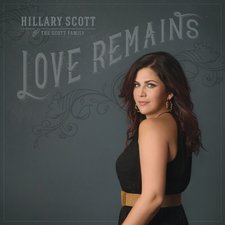 
Scott Stapp, Brian Welch, Brian Littrell, and (of course) Bob Dylan: just a few of the many popular artists in the secular music world that have decided at least once to create an album marketed for a Christian audience, for one reason or another. And now Hillary Scott can add herself to that list. As one third of Lady Antebellum, Scott has seen phenomenal success in the form of GRAMMY Awards, Country Music Awards, and numerous Platinum certifications. Recently, all three frontpeople of the band took a little time off to focus on their own projects, and Scott decided to use this opportunity to branch out with something few likely would have expected; a gospel album featuring the entire Scott family (the artist credit is Hillary Scott & The Scott Family). While Hillary is obviously well-known in her own right, her parents, Linda Davis and Lang Scott, are notable country stars as well (her mother even being a GRAMMY Award winner), and her sister Rylee also appears poised for a career in the industry. But Scott makes sure that her first project apart from Lady A isn't one to be brushed aside with hardly a thought. In fact, what Scott and her family have done is simply make a better album than many artists who have spent a lifetime in the Christian music industry can ever hope to make.

If I had to describe Hillary Scott's sound on Love Remains, I would say it was a happy medium between Sara Groves and Natalie Grant. For an album coming from a country music star who was a daughter of country music stars and made with a full family of country music singers, I was surprised that it really felt more like an acoustic album than a country album. With impeccable production provided by country legend Ricky Skaggs, Love Remains is of a timeless quality that doesn't truly fit into any genre, whether pop, country, rock, bluegrass, or acoustic, though it contains elements of all. The music itself is fairly understated for the most part, but it is great for its purposes. Plus, since most of the time the music doesn't draw much attention to itself, the moments that it does are truly captivating.

Love Remains is split approximately in half between original tracks and covers. The title track is a cover of a 1996 Collin Raye song which displays the heart of this project, which is faith and family (and as an added touch, all four family members spent time sharing the lead). New CCM star Jordan Feliz is also covered with "The River," itself a reworking of the classic hymn "Down To The River To Pray," which is one of the finer lyrical reworkings of a hymn in recent memory. Chris Rice and David Crowder also get their just due, with Crowder's "Ain't No Grave" being notable for having Hillary's father Lang Scott on the lead. Hillary's mother Linda Davis also has the lead on one song, Dottie Rambo's hit "Sheltered In The Arms Of God." But it is two of the original songs that especially stand out; "Safe Haven" was originally written after the passing of Hillary's grandfather in 2011, and is a celebration of his life and memory without striving to bring its audience to tears. But the second one is the unequivocal highlight of the album; the lead single, "Thy Will." Written by Scott last year after a heartbreaking miscarriage, "Thy Will" is one of the rare times in Christian music that an album's lead single is not only truly the best song on the album, but also a made-for-radio hit that deserves all the attention it receives (and it has received a lot, topping the Billboard Christian Songs chart at the time of this review). It is the one time on the album that Scott is backed by a full sound and full orchestrations, and that makes it stand out all the more.

When I listen to Love Remains, I feel like I am listening to an artist that "gets it." She "gets it" more than countless other artists that have tried their hand at making a "Christian" album. Perhaps the greatest sin of those in the industry is to shoehorn God into it as much as physically possible whether it is natural to do so or not. With Scott, nothing seems shoehorned (well, almost nothing; her reference to John 3:16 in "Safe Haven" didn't feel wholly natural). Instead, her faith and that of her family is deliberately and genuinely on display, as is their artistic vision. In spite of the popularity of Scott, I feel like Love Remains is destined to have a woefully underappreciated future, because albums of this kind often do. But it deserves recognition, and it deserves to be listened to by anyone willing to do so.