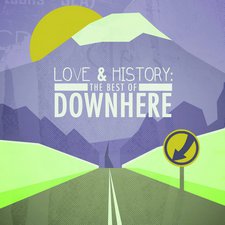 Legendary '60s guitarist Jimi Hendrix once penned the line, "The story of life is quicker than the wink of an eye. The story of love is hello and goodbye." While the career of Canadian pop/rockers Downhere certainly lasted a good bit longer than the aforementioned eye blink, Hendrix's accompanying notion of love is unquestionably an accurate one when speaking of this highly-regarded outfit from the land of the Great White North. Indeed, since the time of their humble beginnings in the mid-'90s at Briercrest Bible College in Caronport, Saskatchewan (population 919), the intrepid foursome - who went on extended hiatus in January of this year - managed to net no less than 39 Dove, Covenant (Canadian Dove) and Juno (Canadian Grammy) awards and nominations, place their share of singles in the top five slots of the CHR and AC charts, share stage space with everyone from Aaron Shust and Jason Gray to Matthew West and BarlowGirl, and garner nearly universal critical approval for their six studio albums released between 2001 and 2011.

Beloved as they were to fans and reviewers alike, at various points during the group's tenure, particularly during the latter portion of their run, front man Mark Martel and his cohorts sounded as if they were ostensibly content to spend their collective time and energy merely filling a slot in the already-overcrowded pop/worship landscape alongside now-ubiquitous artists like MercyMe, Casting Crowns and Building 429. To be sure, despite their noble themes, pleasant demeanor and sincere delivery, made-for-radio cuts such as "Let Me Rediscover You," "Little Is Much" and the Christmas-themed "How Many Kings" do little to distinguish the Downhere collective from the throng of like-sounding soft-pop/rock bands whose songs, for better or worse, have virtually come to define that which most present-day listeners consider as contemporary Christian music.

Thankfully for all involved, this is hardly the sum total of the group's 12-year run. In fact, as often as not, the quartet stuck out like a sort of musical sore thumb - in the best way possible. "The More," from 2006's Wide-Eyed and Mystified, wraps its heartfelt petition to retain the childlike awe of God in the autumn of one's years inside an irresistibly careening, joy-filled pop/rock exterior that bore a near-zero resemblance to the average track situated in the Top 40 at the time - or since, for that matter. The likewise terse, fuzz guitar-driven textures of "What It's Like" will be a similar revelation to those who migrated to the Downhere camp during the last half decade and only know the band by way of its less bracing radio-based output. Most impressive, by a country mile, though, are the epic, sweeping praise-based pieces "Great Are You" and "A Better Way," which stand as textbook examples of what worship music ought to sound like, even as both of them transcend the genre's arguably all-too-narrow confines.

Of course, it goes without saying, everything changed for Martel on September 20, 2011, when he posted a video to YouTube of himself singing the 1976 Queen classic, "Somebody to Love." The clip, which generated over 6 million views (half a million in the first two days), went on to earn him a spot on the official Queen Extravaganza tribute show. Perhaps not surprisingly, the Downhere cooperative make some of their most convincing statements on their quirkier, most Queen-like material. Martel's crooning on "The More," a thoroughly unique amalgam of Freddie Mercury's piercing wail and former dc Talk singer Kevin Max's sturdy vibrato, may well be responsible for the better portion of the song's undeniable appeal. Just as charming is "My Last Amen," a sort of Latin-ized version of Mercury & Co.'s 1974 "Killer Queen" single. And the ingratiatingly out-of-left-field "Living the Dream" will surely inspire baby boomers everywhere to leap to their feet and dance gleefully along to its infectiously sunny grooves while visions of buoyant, music hall-inspired Queen ditties like "Good Old-Fashioned Lover Boy" and "The Millionaire Waltz" reverberate merrily in their heads.

Longtime fans will likely find Love & History all but superfluous, given that it contains no new, or previously unavailable, material. In the same way, the relative preponderance of kinder, gentler tracks, although a fairly accurate representation of the group's recent output, all but paints over missing earlier, more energizing offerings like the shimmering modern pop/rock number, "Free Me Up," or the near-perfect melding of pop, rock and funk found on "Breaking Me Down" - which will likely be nothing short of revelatory to most listeners who don't already own the superb sophomore effort, So Much for Substitutes. This being said, for all of its shortcomings, the retrospective does an admirable, if not entirely thorough, job of chronicling one of Christian music's more unique and talented bands. In light of what Martel himself alluded to as a less-than-bristling tour itinerary as of late, one can scarcely fault him and his companions for laying it all down and venturing out to try something new. At the same time, though, it's hard not to feel at least a slight twinge of sadness as they do. Given the innate skill of Martel and his companions, it seems a safe bet that we'll hear from one or more of them at some point in the not-too-distant future. In the meantime, Godspeed, Downhere.