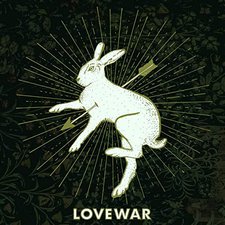 
Depending on how you view such matters, the self-titled sophomore effort by Indiana hard rockers, Lovewar, is either hot off the proverbial presses or nearly a quarter of a century old. Supporting the former theory, the eponymous album was only recently unveiled to the public at large in the spring of this year after a successful Kickstarter campaign afforded original members Tim Bushong (vocals, guitar), Rick Armstrong (bass) and Greg Purlee (drums) the liberty of committing its eleven cuts to tape in Bushong's own studio.

That said, the songs themselves date back to 1995 when the group worked them up as demos and earmarked them for their second project. Due to the ever-dynamic nature of the music industry itself, though, that record, a follow-up to the critically lauded 1993 debut, Soak Your Brain, languished unheard until the fall of last year when its tracks were dusted off, rerecorded and offered up to fans and newcomers alike.

Not surprisingly, the lion's share of the release harks back to the era in which it was created. The sludgy guitars, lumbering rhythms and copious use of drop-D tuning on "Who I Am" would have fit in nicely on any of the first few King's X albums. The nimble, darting rhythms and funk-filled vibe of "Grain of Salt" were the warp and woof of III Sides to Every Story-era Extreme. And the decidedly Nightranger-esque aesthetic of "Stand Under It" should gladden the hearts of stalwart hair-metal lovers who were thrilled by the fact that so many of their favorite Christian rock acts continued to make music under that genre's banner well into the mid-'90s, despite its having all but vanished from the mainstream-market consciousness nearly a half-decade prior.

While the record itself may not be entirely unique, the fact that its material touches on so many familiar reference points shouldn't deter potential listeners from giving it a spin. Bushong's intricate and complex guitar work is carried off with no small amount of skill and aplomb and more than holds its own with that of any of the artists by whom he may have been influenced. Just as importantly, his group's lyrics, which refuse to tread the well-worn clichés favored by so many inspirational artists at that time (and even more so now) are by far deeper and more thought-provoking than three-quarters of that which played, and still plays, on Christian radio.

Listening to Soak Your Brain, it isn't hard to see why Heaven's Metal magazine ranked it one of the top 50 Christian rock albums of all time. Indeed, at a time when such things were nearly unheard of, this was music you could let your mainstream rock-loving friends borrow without having to worry about apologizing for what they would hear. To be fair, the forays into psychedelia ("House of Cards"), Eastern music ("You") and the blues ("Tuxedo Alligator") do make Lovewar a less unified cousin of sorts to its mostly straight-ahead rock-based forerunner. That said, the recent effort's greater diversity is arguably the very thing which makes it not only the more interesting of the two offerings but also a bona fide rarity: a second release that not only sidesteps the dreaded sophomore slump, but also manages to outshine its landmark predecessor in the process.