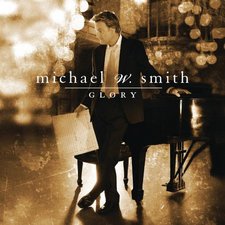 Michael W. Smith has always been much more than just a piano man. As far back as 1989's I 2 (Eye) album, Smith has been incorporating instrumental passages into his work. His first all instrumental album, Freedom, released in 2000 and proved that he would be an adept Hollywood movie score composer if he ever decided to head for the West Coast.

His second all-instrumental album, Glory, finds Smith again mining big themes for musical introspection and meditation. The opening track of the album, "Glory Overture," sets the mood with a strong trumpet fanfare that conjures up a regal scene. In fact, in the visual age we live in, it is almost impossible to listen to this kind of instrumental music without associating it with a film soundtrack. Smith uses this tendency wisely by giving these songs cinematic titles such as "The Blessing," "Joy Follows Suffering" and "Whitaker's Wonder" (a play on Smith's middle name).

"The Patriot" easily brings to mind scenes of soldiers storming the beaches of Normandy or raising the flag on the island of Iwo Jima. With its swell of marching drums and strings, it could find itself a home in countless Veteran's Day tributes and military funerals. And though that might be an odd thought, the music to this piece, and the following "Heroes," has a strong "tribute" feel and honor their namesakes well.

Thankfully not all the songs on Glory are as weighty as the three opening numbers. "Whitaker's Wonder" has a playful Christmas morning feel to it and borrows (appropriately so) a few cues from Tchaikovsky's holiday classic The Nut Cracker. "Redemption" has the joyous feel worthy of that great word and the waltzing tune "The Romance" invokes the memories of young love quite well.

It's worth stopping for a moment and noting that in a Christian Music market that often feels a little too calculated, with its over-saturation of worship albums and Christmas releases, that Michael W. Smith is making music that does not seem to have any agenda. Music made for the sheer joy of creation is a classical form of worship. And by the time Glory reaches its final track, "The Tribute / Agnus Dei," and the first few notes of Smith's familiar worship anthem are plunked out on a piano, it's clear that he is trumpeting a different kind of worship music.

Glory puts Smith firmly in the league of such movie soundtrack luminaries as Hans Zimmer (Gladiator, Inception, The Dark Knight) and James Horner (Braveheart, Titanic, Avatar). With sweeping musical passages, Glory is an inspiring listen and a soundtrack to a movie that might exist someday.