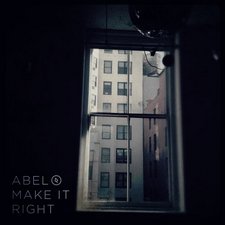 Indie rock band Abel has done a bit of label hopping over the last several years. They got their start on Dreamt Music alongside My Epic and Shapes Stars Make, then jumped over to Come&Live! for their first full-length album Lesser Men, which proved that the band was a force to be reckoned within indie rock. Two years later, they're now on their own for their follow up, Make It Right. Another album funded entirely by fans of the band, Make It Right delivers more of the excellence that Abel used to steal my heart in the first place.

Lesser Men solidified Abel as one of the most underrated rock bands of today, and Make It Right only helps to confirm it. Their style is good ol' fashioned soul-driven rock & roll with a modern indie take. One of my favorite tracks is "Daughter," which straight up rocks from start to finish, only slowing down for about twenty seconds near the end. One thing I love about their music is that, when they really want to, they can flawlessly transition from calm to aggressive or vice versa. "I'll Be Waiting" features driving guitars and some occasional shouting, with a musical bridge near the end that's more quiet and haunting. Songs like "Fire Walk With Me" and "Fine Lines" can give off one feel, and then blindside you with a bit of rock bi-polarity. This is in large part due to vocalist Kevin Kneifel, who emphasizes some words by partially screaming them when needed. His singing voice is very indie, like a slightly deeper Cody Bonnette, so when he shouts, it's not too harsh but it makes you feel what he's saying.

What's he saying, you ask? Make It Right features some of Abel's most honest and, at times, confrontational lyrics thus far. And it doesn't take long before we get a good dose of it; "Fire Walk With Me" starts off with a personal look at our fallen nature from Kneifel's perspective. He says, "White skin, black dress, take me to bed, I thought the devil was a woman but it's all in my head, I spent years as a sinner thinking I could make a case for holiness, but I never did." Though it's Kneifel's story, it's one that many of us can surely relate to, as we once tried to do things our own way before surrendering to Christ. The rhythm of the song is brilliant as he relays this message to us, with some of the best guitar work we've heard thus far from Abel. The next verse takes the focus off of his own sin and casts the focus onto hypocrites among the followers of Jesus: "I hate this town, everyone's a liar and the men of God are busy sleeping around, but they don't wanna hear it, they don't wanna hear a sound."

But don't think that Abel spends their time calling people out; when failure or depravity are sung about, it's usually Kneifel singing about himself. In the case of "Your Heart, Your Soul," his humility shines through as he recognizes God's sovereignty: "If all the jewels in all the world could sing, they'd scream for Your glory, not for me, so why do I feel like I deserve this banner for my name over all the earth?" The much tamer closing track, "Comfort and Truth," continues on in the same fashion. The songs each have their own overall message to carry, but portions of each song work in conjunction with each other. In "Comfort and Truth," I love the line: "So I stray from the light 'cause Your plans never look a thing like mine." I know, personally, that sometimes I can't figure out why God is doing what He's doing, and it becomes so easy to try to walk away and figure things out on my own. Of course, this never works, and we need God's help again. Kneifel follows those lyrics with "Are we dead, everyone? Will Your hand ever come to take me home with You?"

With Make It Right, Abel has done it again. The sound that was perfected on Lesser Men is prevalent in a big way here. Driving guitars, loads of chemistry, lots of passion and intensity, and perfectly-executed mood changes are what you can expect with these ten songs. These guys just keep getting better, and I have no doubt the trend will continue. Indie rock fans, stop by Abel's Bandcamp and pick this up now.