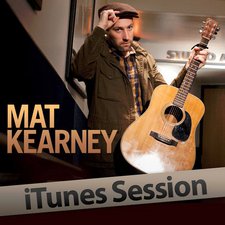 This time last year, Mat Kearney released his fourth full-length record, Young Love; a fun, toe-tapping album that brought back some elements he had abandoned on the previous record. Late last month, Mat released his third iTunes exclusive EP with six acoustic versions of Young Love songs and one cover. With the polished sound of last year's release, the acoustic renditions offer a vastly different experience for half of the songs found here, while the others don't offer up much different than their album versions.

The first three tracks will be the ones Mat Kearney fans will definitely want in their collection. "She Got the Honey" has a much milder, intimate quality than the Young Love version. Lyrics such as "Well I'd beg, steal, and borrow if tomorrow she'd stay" become more of a plea than a playful line. "Ships in the Night" borrows Ingrid Michaelson to sing alongside Kearney in the choruses. The stanzas, which brought back the sorely-missed rapping before, sound more like soft singing here. This difference, combined with Ingrid's voice perfectly complimenting Mat's, makes this song take on a life of its own and become the highlight of this EP. The third track, "Down," is delivered nicely and showcases Mat's vocal range more so than the original.

"Hey Mama" is where the six Young Love songs begin to sound very similar to their original versions. The most notable different is the absence of the synth elements. The signature clapping and "oh oh's" in the background are all still here and performed with precision in the live setting. The next two tracks, "Learning to Love Again" and "Rochester" are almost identical to their full-length equivalents. They are both performed to perfection and sound wonderful, but probably won't satisfy fans that already own Young Love. It would have been nice to hear stripped-down versions of other songs from the album, like "Chasing the Light," "Young Dumb and In Love," "Count On Me," or "Sooner or Later." The final track is a cover of Rihanna's popular 2011 single, "We Found Love." Multiple artists have covered this song already, but Mat manages to create an acoustic version that we have yet to hear before. The grim lyrics are matched with somber vocals and a passionate delivery.

This iTunes session will add a few new tunes to Mat Kearney fans' playlists, with the beautiful cover and acoustic versions of the first three tracks sounding distinctly different than their Young Love counterparts. The other half of the tracks, while performed excellently, do not differentiate themselves enough to warrant the extra purchase.