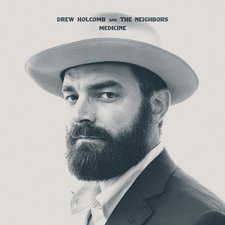 Drew Holcomb and his Neighbors are the real deal. In a musical landscape that is increasingly fragmented--and authentic, chock-full-with-feeling-and-grit rock and roll is scarce to be found--Holcomb continues to bring authentic, honest music time and again. On the band's latest, Medicine, heartland rock is the name of the game.

Taking cues from Tom Petty and The Heartbreakers and The Eagles, Medicine opens slowly with the pastoral "American Beauty," which celebrates young love and the nostalgia of childhood in the kind of song that most songwriters would give their front teeth to write. The next song, "Tightrope," opens slowly, with Ellie Holcomb chiming in on harmonies (her absence is felt keenly on Medicine) but builds to a satisfying crescendo and a promise by Holcomb to "go wherever you go." "Here We Go" is a slightly corny stab at a bar-stool, honky-tonk swinging number, but Drew and the Neighbors pull it off with verve. (And the video with the band dancing around in various period costumes, including Holcomb shuffling away in a banana suit is not to be missed.)

It isn't till the fourth song, "Shine Like Lightning," that Medicine truly takes off. Taking a few notes from the aforementioned Tom Petty's "Wont Back Down," "Shine Like Lightning" is a statement of purpose that would sound great in an arena and seems destined for a truck commercial or sports montage. "Avalanche" and "Heartbreak" are both dusty numbers that seem like the soundtrack to a small town. In "Sisters And Brothers," Holcomb steps into his best gospel shouting voice, similar to current popular Irishman Hozier, to deliver a rousing plea for unity. "When All Is Said And Done" closes the album with a meandering, steel guitar solo that feels like a winding river, and just right for a song collection this unabashedly classicist.

Holcomb is an unapologetic traditionalist songwriter (even the cover photo of Medicine looks like it could have been taken fifty years ago) and these scrappy, down-home tunes might not be for everyone, but if you are up for some unvarnished, soulful songwriting at its best, Drew Holcomb might have just the Medicine for you.