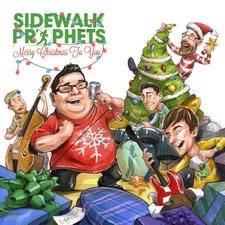 Sidewalk Prophets
Merry Christmas To You

Sidewalk Prophets clearly know what they want to communicate with the cover of their first full-length Christmas album, Merry Christmas To You: Fun. With a cartoon image of the band around a Christmas tree, they illustrate the musical direction they want to take, and the album mostly fulfills this desired effect.

Kicking things off with Linus from Peanuts reciting Luke chapter 2 from that classic scene in A Charlie Brown Christmas is a great touch. The song it introduces, "What A Glorious Night," is a pretty good slice of Mumford & Sons style folk rock, complete with the requisite hand claps and banjos. This style of song agrees with the Prophets, and lead singer David Frey's voice sounds great in this context. Actually, Frey's voice carries a lot of the songs on this album. Second song, the classic "White Christmas," swings on a 50's do-wop groove, while Frey does his best Bing Crosby. Francesca Battistelli slides in next to Frey for a groovy duet, and the two mesh well and do the sentimental Christmas song justice. "Give Me Christmas" is a little too schmaltzy, and the band comes to the end of its funkiness here. "Have Yourself A Merry Little Christmas" fairs better; it's at this point though that the onslaught of songs with the word "Christmas" in the title start to blend together a bit. "Hey Moon" is a nice treat in the middle of all of this. A slower, more reflective tune, the band shines more on the originals like this than on the obligatory standards. The same goes for "Hope Was Born This Night" and the upbeat "Because It's Christmas." The two carols here, "Silent Night" and "What Child Is This," are both well done, but are fairly straight-laced in their presentation. Perhaps it's time to retire many of the old 20th century Christmas pop tunes (at least new versions of them) and start to write the next great batch. That said, Sidewalk Prophets did well to emphasize the fun and good times of the holidays on their first Christmas album, and by that measure, a few missteps aside, there is much to make you smile on Merry Christmas To You. - Review date: 12/4/13, written by Alex "Tincan" Caldwell of Jesusfreakhideout.com