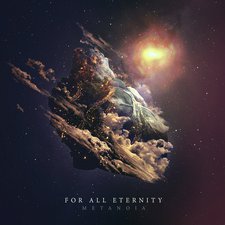 For All Eternity
Metanoia

Ten years ago, Facedown Records was barely on my radar. I had heard of some of its bands (Jesus Wept, Sinai Beach, Nodes of Ranvier), and occasionally liked some of their material. Over the last few years, though, it's released some of the best Christian metal there is - and when it's not releasing the best, you'd be hard pressed to use any term less than "great" to describe the content. For All Eternity is the latest signing, and their debut, Metanoia, is a fairly strong one.

The thing that I really like about Metanoia is that it takes several different, very familiar elements of melodic hardcore and mixes them together with ease. Of course, as any good metalcore band should, they bring a heavy dose of...well, heavy; you get some breakdowns and in-your-face screams in "The Divide" and "Unharness," among others. But it's more than just mindless chugging. For All Eternity incorporates a small amount of electronic music into their songs, and - in an Underoath-esque move - clean vocals from the band's drummer Michael Buckley. "Stitched the Same" is a good example of both of those things. It's an electronic-tinged indie rock song, with some heavier elements thrown in for good measure, but clean vocals exclusively. Buckley provides the majority of those vocals, bearing a striking resemblance to Spoken vocalist Matt Baird (albeit higher, and it takes some getting used to), but the song is also graced by Kyle Tamosaitis, former vocalist of Blood & Ink/Rise Records band Burden of a Day. A change of pace from the overall sound of the album, "Stitched the Same" is one of its stronger offerings.

The title track and lead single, "Metanoia," is perhaps the most memorable track. Its message is one of hope - the hope that can only be found in Jesus and nowhere else in the world, and you'll find yourself singing the chorus over and over again: "You should know hope found its way, found its way to me, you too can be changed forever." While the whole album is good and has some replayability factor, a lot of the other songs do little to distinguish themselves from other bands in the genre, most notably For Today. As a matter of fact, Mattie Montgomery apparently provides guest vocals in "Unharness," and after several listens, I still have a hard time figuring out when lead vocalist Shane Carroll passes the mic to Montgomery. If you're a metalcore band and you're going to imitate another band, For Today is a good band to imitate, but, unfortunately, it ends up making it harder to stand out from the crowd. And, these days, it's an overpopulated crowd.

I have high hopes for For All Eternity. Metanoia is a solid debut and it has a lot of great points. Again, it's good for multiple listens, and it sets the bar pretty high for their sophomore album. I'm not familiar with their pre-Facedown material, but if it's on par with their 2015 material, I'll be glad to hear it. If you haven't experienced Metanoia yet, put down what you're doing and go give it a listen, and I'm sure you'll be glad you did.

For All Eternity is the latest, newest addition to the Facedown Records family. After Attalus made a superb impression earlier this year, For All Eternity will have their hands full trying to keep up the momentum. But while Attalus produced an epic, theatrical rock album, this band is a bit more what we have come to know and love from Facedown; metalcore. And the Australian quintet is pretty good. Unlike most of Facedown's other metalcore bands they have had, For All Eternity splits their vocals pretty evenly between screams (from Shane Carroll) and clean vocals (from drummer Michael Buckley). Despite their obvious differences, I often made mental comparisons to Underoath when I listened to Metanoia (a Greek term for repentance) regarding the use of vocals; Carroll with his guttural growling screams, and Buckley with his high-pitched, almost feminine-like voice (imagine a higher-pitched Aaron Gillespie). It took a while for Buckley's voice to grow on me, but it did eventually. Overall, this is a metalcore record that draws a lot of cues from modern rock, comparable to recent For Today (but more melodic). In fact, there is no shortage of comparisons to For Today--from the two names, to similarity of Carroll's and Mattie Montgomery's screams, to the similarity of their breakdowns (though perhaps not their frequency). Both bands even used a Greek term as the title for both their Facedown debuts (For Today's was Ekklesia, a term usually translated in the Bible as "church"). But it is too quick and unfair a judgement to label them as a For Today knockoff because For All Eternity already sounds like a seasoned and highly technical band, and they can carry a melody better than For Today ever has.

Indeed, there is no reason for fans of Christian metalcore not to check out Metanoia. It is an unashamedly appealing record, and its lyrical focus of struggling with inner turmoil, demons, and attempts to repent are both easy to resonate with (as Carroll screams in the title track, "We all make the same mistakes") and worth digging into. This isn't nearly the best metalcore album I've heard, but it is a definite bright spot in a down year of Christian heavy music. - Review date: 7/29/15, written by Mark Rice of Jesusfreakhideout.com