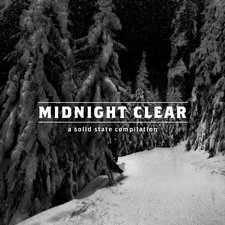 Raise your hand if the first thing that comes to mind when you think of Christmas is metal. No, not one of the metal trees in A Charlie Brown Christmas. No, not tinsel. Not jingle bells. Heavy Metal. Midnight Clear isn't the most natural collection. Most Christmas songs you hear during the holiday season are traditional hymns or pop covers. This collection is the exact opposite of that, but that's a good thing. With an all-star cast of the biggest names in the scene, including former Solid State favorites August Burns Red, the label has struck gold with an album that delivers on every level.

There's really an interesting mix here. Not only is the album as a whole a different take on many of the popular carols, but each song adds something unique. Some of the tracks are instrumental, like "Silent Night" by Forevermore, while others turn into a complete thrash fest, like "O Come, O Come Emmanuel" by For Today. And those are just the covers. Some of the best tracks don't even fit any of those categories, like Memphis May Fire's "He Came With Love." The band has never been shy about their beliefs, but it's so refreshing to see a group that's a little more mainstream write such a powerful, yet musically simple, track.

The only real drawback to Midnight Clear is the one thing that makes it so unique to begin with- its style. While songs like The Ongoing Concept's version of "Jingle Bell Rock" are enjoyable showcases of talent, they're also not likely to find a permanent place on your Christmas playlist. The holidays are a time for friends and families to get together, and chances are that not everyone in your group will appreciate these songs as much as they should. Not that they don't have a place, because they certainly do, but at times it felt like it would have been nicer if the album was more like August Burns Red's second contribution, "Flurries," from 2012's Sleddin' Hill album, instead of "Joy to the World," the new recording from ABR found here. But those are just details. It doesn't matter where or how you listen to Midnight Clear, it deserves to be listened to all the same.