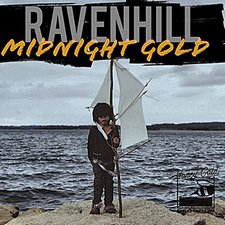 
In 2015, hard-working independent rock band Ravenhill got a bit of a break by signing to the then-very-promising Slospeak Records. Their album Soul was a strong effort, but soon after its release, the band went back into the independent scene. This time, however, lead singer Joshua Clifton was gearing up to the creation of his own independent label, Honey Gold Records. 2018 saw the release of Ravenhill's Spirit EP, the forming of Honey Gold, and album release number one, Midnight Gold.

Midnight Gold opens in a slow-burning fashion with "Ghost." One would not be too entirely far off to use a term like "ominous" to describe the slow build-up. As Clifton comes in singing, "Hell is empty, 'cause all the devils are here, I feel just like a ghost unable to disappear," more and more layers keep piling on, adding to the suspension of an impending explosion in sound. This may be one of the best intros on a rock album I've heard in recent memory. The track fades out a little and lets "Midnight" come in with a load of energy. I have to imagine that this is a fan favorite when it comes to the band's live show. Following is "Gold," a classic Ravenhill rocker that brings with it a bit more intensity and some harsher vocals in the chorus. The band sounds as tight and focused as ever on this EP, and "Gold" is a shining example of their strengths. Seamless tempo changes, furious drums, excellent guitar work, Clifton's voice; this is the EP's highlight and one of Ravenhill's best songs to date.

"Howl" stomps on the brakes pretty heavily, with a haunting, southern-flavored, acoustic ballad. The blues-inspired guitar tones sound great and the way the song amps itself back up near the end is flawless. Another highlight in Ravenhill's career is "Bangarang." Unrelated to Skrillex in every conceivable fashion, "Bangarang" really emphasizes the band's punk rock and melodic pop punk influences. It's fast and hard-hitting, but it has a really great stomp-and-clap kind of bridge that almost demands a sing-along (not to mention that sweet bass lick that's going on during that part...goodness!). The final track is a re-recorded version of an older song called "The Stranger." Originally found on the band's independent release, Lions, it may be new to some fans who have only recently discovered Ravenhill. This new version is still lengthy (just over seven minutes), but features better production to really let the song shine. Clifton and the gang aren't shy about re-recording older tunes, and if they keep improving on them as they have here, I'm all for it.

If you've yet to jump on the Ravenhill train, it's not too late. This is an exciting band with a promising future and several solid albums already in its discography. But whether you're a new fan or you're already well-acquainted, listening to Midnight Gold is a great choice. It highlights all of what the band does best and, as mentioned above, also presents some of the best Ravenhill material to date. Make sure to take a moment and add this to your music collection.