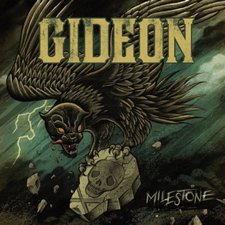 After the explosive sounds of the hardcore group Gideon were released on a 2010 independent EP, they were quickly picked up by Strike First Records, who released the band's first national album, Costs, a year later. Receiving good feedback on the album, Gideon was promoted to Facedown Records. After a bit of grooming, they're now prepared to release, Milestone, their first record as an official part of Facedown itself.

Gideon hits it hard at the beginning of the album with the song "Gutter." I'm impressed with the direction that Facedown Records' artists have gone recently, and "Gutter" is a good example. Yeah, it's got chugging guitars, breakdowns and barking vocals, but the musicians also take opportunities to demonstrate their skills in more ways. Once you get to the chorus, the guitarists refrain from any chugging until said chorus is over. Instead, we're treated to some soothing, higher-pitched experimenting of the instrument. Not a guitar solo, mind you, but they move around the neck a little more than you'd expect. By the time "Bad Blood" comes in (making the listener lightly nod their head to the beat), you may come to the realization that, yeah, these guys are pretty good at what they do.

"Prodigal Son" shows off the chemistry between the band members, with a section where the guitars, bass and double kick drums all play together in an interesting time signature. The bass guitar also gets a few seconds to itself a couple of times, and it sounds purely awesome for those few seconds. "Prodigal Son" also changes tempos a couple times, and it's seamless. It's a highlight of Milestone, along with the powerful "Maternity," where not only the music is very strong, but vocalist Daniel McWhorter stretches his abilities in some parts.

Gideon comes off as fairly lyrically abrasive and confrontational in a few of the songs. Going back to "Gutter," McWhorter is very upfront with a former friend who seems to have turned his back on the friendship and walked away from his faith in doing so. McWhorter calls him out in harsh love and finishes the song asking for clarity from as he recognizes that God hasn't left him or his friend. "Overthrow" confronts an unnamed person with hypocritical tendencies (at first, it could also seem like a calling to believers to stop judging, but the second verse indicates that it's a particular friend). While by no means poetic in nature, the lyrics are strong enough to convey their message: "Talks would never be like this, I reminisce and think about the times when you were once my good friend, now you're a parasite, only furthering yourself, you will receive your own." Though a good dose of confrontation in Christian music can always be very appreciated, it's also nice to see the worshipful and thankful side of these metalheads, such as "Prodigal Son" ("I never knew how much You meant to me, and now I'm taking it back, I used to count down the days that I'd leave with my selfish ways, I'm taking it back with the love that You have shown me and the man that You have molded me to be, I'm taking it back, You were my restoration"). Hardcore of the Gideon kind isn't too well known for artistic lyricism, but these guys did a fairly good job of wrapping their messages in some better packaging than a lot of other hardcore acts out there.

There's quite a bit about Milestone to like. The fair mixture of chugging hardcore and hard rock experimentation with the added chemistry of the band creates some just plain good music. Speaking of which, I'd be remiss if I didn't mention the instrumental track "Milestone," which tones the music down a lot and stays acoustic and relatively quiet the entire time. It's a further testament to the musicianship of the band, as it can be very easy for a track like this to feel really out of place or forced, but "Milestone" isn't either of these things.

In the year 2012, I feel like Solid State Records is dominating as far as heavy music goes, with recent releases from Wolves at the Gate and Demon Hunter destroying fans' iPods. But Gideon's Milestone shows that Facedown Records still has game. It's not the best metal I've heard this year, but it's solid and a definite recommendation for hardcore enthusiasts, especially if you liked Costs or you're into groups like Hatebreed or Stick To Your Guns.