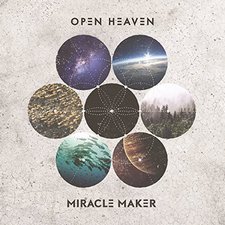 
The issue with garnering a widespread reputation is that expectations come along with it. This seems to be especially true for worship acts; perhaps the reason that groups like Bethel and Hillsong hardly venture out creatively is because they are limited by their own namesakes. That was part of why I was interested in listening to Open Heaven's Miracle Maker: a ministry album from a lesser-known congregation like Faith Life Church in Columbus, Ohio meant that I didn't need to have any assumptions going into it. Although there are still plenty of genre clichés that plague the tracklist, Open Heaven does just enough with this live offering to make it feel distinct.

From the get-go, I was struck by the stylistic choices in the opening songs. Fun, poppy synths, synchronized guitar and bass licks, and an emphasis on rhythm over melody make "For You" and "Be Glorified" quickly perk the ears up. The latter song even goes so far as to provide a hyper chorus that feels anything but boringly anthemic and drum beats that switch up the cadence fairly often. Combined with persistent electronic instrumentation and the "live" feel, there is a real musical energy that persists throughout many songs (though I couldn't help but feel like the hook in "Without Fail" is nearly identical to that of Coldplay's "Adventure Of A Lifetime").

That being said, there is a tonal dualism present on the album, as some songs clearly possess the aforementioned electricism, while the other half fall into the more basic ambience of most worship music. This binary nature often deadens the flow of the album and can come across as confusing. Other than that, most production decisions, including having multiple singers lead different songs and the superb mixing itself, work really well to make the album feel appropriately collective and grandiose.

Open Heaven also clearly attempts to keep the lyrical focus on God, but their writers were unable to avoid some of corporate worship's troubling trends. There is a definite emphasis on praising God since He did something for me, as opposed to worshipping Him for His own sake. As stated on the opening lines of the album, "Lost and lonely, now I'm found in You/Past behind me, now all things are new." This focus on the self covers a large portion of the album, however, I do appreciate the poetic take on the idea found on "Creation" ("The rhythm of creation is the cadence of your love for me/The sun, the moon, and stars form on the canvas that you paint for me").

The lyrics also tend to be either romantic ("Won My Heart" is a little too obvious) or cheesy ("Wonderful Savior" is the prime culprit with "Every day is a good day to praise You/Every day is a good day to celebrate"). Admittedly, these contemporary worship tendencies are a personal pet peeve of mine. They might not actually obstruct the experience of most listeners, but the lyrics hardly rise above typical worship fare either way.

The last couple of tunes on Miracle Maker are certainly the strongest in creating a unique palette for Open Heaven. The mid-song spoken word and repeated chant on "King of Kings" is the album's most memorable stretch, and the fact that "Here With Us" is essentially an extended build with unconventional chords ties everything together in a meaningful way. Miracle Maker pushes the corporate worship envelope ever so slightly, but that alone is a feat that should be favorably acknowledged.