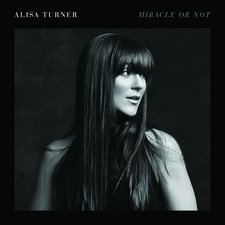 Alisa Turner
Miracle or Not


Alisa Turner, in her debut full-length release, Miracle or Not, sets herself apart from most radio-friendly worship music. Vocally, she sounds more at home with indie alternative than mainstream worship, though, for most of the album she stays within the slow, contemplative lane that a lot of recent worship occupies. This doesn't mean Turner isn't passionate, because she definitely is, just that too much of the same thing wears Miracle or Not down after a while. This is a shame because there are some great songs and moving performances on this album.

The first track, "Lift My Eyes," begins with a dulcimer line, which adds a nice folksy touch. Apart from that, there's nothing that diverges from the norm on this song, though it's lyrically and musically catchy. When a worship artist quotes Bible passages that have been used by many other worship artists, as Psalm 121 has, it creates a divide within the listener. On the one hand, it's understandable that this psalm is quoted so often because it reminds us that God, "the maker of heaven and earth," has helped us, and will continue to help us in our times of need. But, on the other hand, there's that part of our brain that says, "Not this one again!" even though we fundamentally agree with the message.

Despite some worship music clichés, Miracle or Not can also be raw and honest. On the title track, for example, Turner sings, "How long will I have to hear the stories of how You were able / How long will I have to celebrate the miracle that's not my own / How long will I lift my voice and sing again that You are always good / when I'm feeling all this distance, I thought I never would." Far too often in Christian music, artists (or labels) seem afraid to show their frustrations with God and other Christians. And although Turner doesn't describe the hardships she's been through, the pain is palpable here, giving added meaning to the chorus as she answers her questions: "As long as it takes for my heart to find its song / As long as it takes to know I'm still not alone / And at the end of the dayI know that You love me / miracle or not." The smoky texture of her voice, and how it purposefully breaks, brings this song from good to great.

Other highlights of the album are "Miracles," "My Prayer for You" and "Psalm 13." "Miracles," through Alisa's sincere vocals that range from wispy to belting, reminds us simply but powerfully that we serve "The God of miracles." As Christians, God's power is something we believe in but often take for granted. Recently, I heard a pastor point out that salvation itself is a miracle. Think about that while listening to this song. In "My Prayer for You," her honesty comes through again as she's accompanied by a simple arrangement that doesn't detract from her haunting performance. The closing track, appropriately titled "Psalm 13," is a stripped-down piano ballad that beautifully paraphrases the psalm.

Overall, Miracle or Not is a solid debut for Alisa Turner and her unique voice. While there aren't exactly low points on this record, many of the songs get lost in the shadow of the truly great ones.