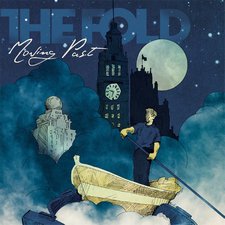 The Fold
Moving Past

After garnering a decent fanbase with their two records through Tooth and Nail, The Fold decided to join countless other acts and go the independent route. The transition was relatively seamless, with 2009's Dear Future, Come Get Me maintaining the quality and production values as the previous releases. When all is said and done, however, that album felt like more of a lateral move than a progression. Four years and a successful Kickstarter campaign later, the band is set to self-release their fourth major release, Moving Past.

Four years is quite the gap between records, but that's not to say the boys out of Chicago haven't been busy since Dear Future. Careful listeners, or those with children, will recognize the band's pop/rock sound if they have tuned in to Cartoon Network's Lego Ninjago. Those who follow the group more closely have been treated with some hilarious music parodies and other charming videos from Daniel Castady and the gang. What we care about most, however, is the music.

All of the songs on Moving Past can easily be placed into one of two categories. The majority of the 13 tracks fit the theme of moving on, be it a relationship or just a trial in life. The rest are simple, fun love songs that will surely become fan favorites. It's worth noting that 8 out of the 13 songs clock in at 4:00 or more. While this is a noticeably bulky running time for the genre, the songs rarely overstay their welcome.

The album opener, "Different Kind of Disease," wastes no time establishing the energetic pop sound the band does so well. There is a subtle sense of aggression here with the fast pace and lyrics like, "losing you, struck a nerve, in the deepest part of me, completely lost, in a world, that I don't know anymore." The first real standout track, "Live Forever," taps into the brilliance found on the Stargazer EP. The song is lighthearted, atmospheric, and an absolute delight to listen to. "I can't live forever, these bones don't stand a chance."

The furthest outliers on the album are "Love," an acoustic balled, and "My Side." The latter is one of the few tracks to slow the tempo down drastically, but only until the tail end of the song when the emotion pours out and that aggression the album opened with reemerges. Closing the album is "Dreams," a reimagining of "These Are My Dreams" from Dear Future. There are ample differences here that improve on the original, so the mulligan is a welcome bonus track.

Overall this is another solid entry from The Fold. Fans of the previous releases will find plenty to enjoy on Moving Past, including a bit more variety. While there's nothing groundbreaking here, fans of the genre in general can pick this album up with confidence.