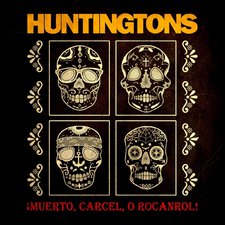 
It's be a long time since we've gotten a new Huntingtons album. It's no secret that these leather-clad punk rockers emulate the punk legends, list them as a their main inspiration and influence, and have even done a complete Ramones cover album. It's been seventeen years since we've seen an album full of original material, but the wait has ended. Their last album was a covers album, entitled Rock and Roll Radio, released in 2016 and outside of 2009's B-sides album, Punk Sounds, and 2005's acoustic farewell album, Pull the Plug, the last time we saw the Huntingtons releasing new material was 2004's self-titled album. Now the punk rockers have finally returned with Muerto, Carcel, o Rocanrol! (Basically: Death, Jail, or Rock and Roll!) How do a much older Mikey, Cliffy, and company sound? The short answer: like the Huntingtons!

The opener is a classic Ramones-inspired Huntingtons song in "Too Old to Care." It's an immediate walk down memory lane for fans of the band and the exact kind of thing most were likely hoping to hear. I got really excited, however, when "I Am the Liquor" started. What a flashback to the Flying Tart days of the band. It's a little faster and a little more aggressive and definitely fits into that era of the band's music -- and several of the songs have that same feel. "The Slammer," for instance, brings back memories of "Crackhead" in particular. In fact, there are several reminders of, and references to, Fun and Games on the album: Penny ("Losing Penny") makes a return in "Not Penny's Boat" (which is also a very LOST inspired title) and "Thank God For the Bomb" is a direct refernce to "Alison's the Bomb" -- "And as far as this 'Alison's the bomb' Well, thank God for the bomb I say." Heck, you could even tie "You Don't Have to Go" back to their "Come On Let's Go" cover if you really wanted to stretch things a bit. While neither of these songs directly relate to the songs from Fun and Games, they are certainly fun easter eggs of sorts. The album is a great mix of Ramones-esque punk rock ("Too Old to Care," "Things Are Gonna Get Better," and "Be With You"), faster punk rock reminiscent of their early days ("I Am the Liquor," "The Slammer," and "Say Hi to Your Mom"), and some good ol' punk and roll ("Innocent," "Bottom of the Bottle," and "I Don't Wanna Die Alone"). All in all, the album is a great example of what punk rock used to be and what it still has the potential to be. The spiritual references from previous albums are pretty much non-existent, but nothing is offensive here either. It mainly just feels like the band enjoying the music they are making.

It's really great to have these guys back in the mix. I never thought we'd get another Huntingtons album, but Muerto, Carcel, O Rocanrol! immediately became one of my most anticpated albums for 2020 when I learned it was coming out. This isn't quite on the level of Fun and Games or High School Rock, but it's still a really good and enjoyable album from front to back. Longtime fans should find a lot to enjoy here, but it's doubtful to win anyone over who hasn't cared for them in the past. However, a new generation of listners have a chance to discover the band, their back catalogue, and maybe even some old Ramones tunes. The band's long awaited return didn't disappoint and is definitely one of my favorites of 2020. This reviewer is certainly happy that Mikey and the gang chose rock and roll!