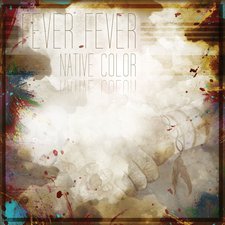 Fever Fever's national debut Aftermath, which slipped by largely unnoticed last year, was a fantastic alternative rock album that became more captivating with each listen. One year before this Slospeak-released album, the band put out an equally impressive independent acoustic album, entitled Native Color. Though more stripped down than its previous and successive projects, it is no less complex or intricate, featuring a fresh blend of xylophones, guitars, mandolin and strings (among other organic/acoustic instruments).

"Clouds Catch Fire" introduces Native Color with a soft kick and rich acoustic guitar picking. Drew Murfin's rugged-yet-smooth vocals are soon layered in, followed by a breezy flute hook, backing vocals, hand percussions, and finally a second, brighter acoustic guitar. In the last 30 seconds, the music abruptly stops, leaving Drew and company singing acappella. This mesmerizing song hinges on a mere 24 words repeated four times, "come, let's go to where the clouds catch fire / breathe in that air you so desire, where the clouds catch fire," and yet, it couldn't be a more inviting way to open the 21-minute EP. From there, we are taken through a whirlwind of intriguing sounds and melodies that will make you smile on the gloomiest of days.

Half of Native Color's lyrics revolve around feelings of romantic love, and though they are sometimes a little shallow, they are delivered flawlessly through vivid and poetic metaphors. A perfect example of this is the first verse of "Mystery of Love," where Murfin sings "these fragile legs can't go no further / these prideful knees drop like boulders into the dust" to describe falling in love. But the songwriting is most remarkable when Murfrin tackles other themes. On "Everyday," he makes you to think deeply about how we search for answers in life that are right in front of us (arguably talking about Jesus) with a few simple words, "every day we see the shore / every day we look for something more / and yet, we still roam the earth."

These six songs may not be individually as stunning as the stronger moments of Aftermath, like "Blue" or "Sea Meets the Earth," but the Native Color renditions of "Beautiful Dream" and "On Top of the World" (renamed "A Line in the Sand") are superior to their re-recorded successors. Additionally, there are no filler tracks, such as "Windward" or "Inceptiones Novae." If Fever Fever drops the overly-sensitive moments of their songwriting (something they still had on Aftermath), they will have the recipe for a masterpiece. As we wait for that defining work, do yourself a favor and pick up a free copy of Native Color on Noisetrade, and be sure to leave a tip for these fine gentlemen.