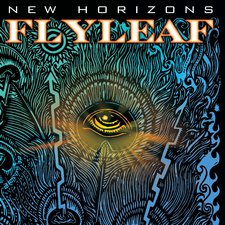 Flyleaf fans have been anticipating the release of the group's third full-length album, but found themselves shocked when the news broke, only a week before the release of New Horizons, that Lacey Sturm was leaving the band. The news was surprising and nearly overshadowed the upcoming album, but alas the bittersweet moment has arrived. Though losing a singer is disappointing news for a band and its fans, Flyleaf's follow-up to Memento Mori is anything but. The band continues their evolution with this record and shows a vast improvement from their previous effort. New Horizons offers a good mix of hard rock, melodic rock, and softer songs.

The opener, "Fire, Fire," is more along the melodic side of the spectrum and gets things started marvelously. The song circles around deceit and being something you're not, as Lacey uses the imagery found in James 3:6 in the lyrics. "What you confuse for Glory's fire is fire from the tongues of liars." Next up is the title track, and lead single, which honestly had many fans concerned about the stylistic direction for the band on this record. "New Horizons" is probably the most alternative song, musically speaking, the band has written, and while as a lead single it may have been a touch scary, it actually fits nicely into the overall soundscape of the album. Longtime fans can be happy with "Call You Out." With sounds similar to a song like "Beautiful Bride," it is the first real hard rocking song on the album and the guitar riff makes it one of the most enjoyable. The hard rock vibe quickly gives way to a softer rock song in "Cage on the Ground" and really lets Lacey show off her vocal abilities. "Great Love" and "Bury Your Heart" also follow suit as more toned-down songs.

"Freedom" cranks up the hard rock again and is an album best. "Saving Grace" follows and is another softy, but serves as a personal favorite. The lyrics in the chorus are a cry to God as a surrender of self as Lacey sings, "Save me Grace; I'm sick of saving face. Will You hold me close? You're all I want to know anymore." The song in general features some of the most beautiful and heartfelt lyrics penned by the band. "Stand" is another song like "New Horizons," while "Green Heart" is right up there with the intensity of "Freedom" and may be the band's heaviest song to date. The final track, "Broken Wings," is the softest on the record and the opening verse almost feels like a goodbye to her band. Lacey sings, "Thank you for being such a friend to me, oh I pray a friend for life. And have I ever told you how much you mean to me? Oh, you're everything to me. And I am so lost for words. And I am so overwhelmed."

Several aspects, including the one mentioned above, of New Horizons seemingly point to Lacey's departure. The press release didn't say when the decision was made, but a couple of listens to this album will have you thinking she, and the rest of the band, knew it was coming. Even the album title points to it as the band itself has a "new horizon" with replacement singer Kristen May. In "Fire, Fire" Lacey sings, "That's enough, now dry your tears. It's been a long eleven years." -- the approximate length of time the band has been together -- and in "Cage on the Ground" she sings, "When I take my bow, I'll disappear out to the sound"

While it is certain many were hoping for a heavier album, myself included, this record simply isn't. What the album manages to do is take the heavier aspects from their self-titled and the melodic aspects from Memento Mori and combines them together. By taking the best of both of its predecessors, New Horizons becomes a fantastic album that truly rivals the group's self-titled debut. What's the worst thing about the album? The hideous album art... What were they thinking? Although unfortunate, New Horizons is a fitting farewell for Lacey Sturm. While she will be missed, hopefully it doesn't spell the end for the band. One can only hope that Kristen May can carry the torch and help keep Flyleaf relevant. New Horizons is set to be one of this year's best and should not be skipped by fans of rock music. I think I speak for all Flyleaf fans when I say, "Goodbye, Lacey. You will be missed."

After two years since their last studio album, Flyleaf has resurfaced on the radar once again. Taking qualities from Flyleaf and Memento Mori, the Texas natives have been able to incorporate them into their latest opus, New Horizons. Along with paying homage to their two prior albums, they're still able to add freshness to their diverse rock sound.

New Horizons opens with two mellow (for Flyleaf) songs, "Fire Fire" and the title track, and both seem to possess that "rock radio" feel. Showing that they have not abandoned their aggressive-sounding roots, "Call You Out," "Freedom" and "Green Heart" take that edgy route Flyleaf's famous for. Meanwhile, "Cage on the Ground," "Great Love," "Bury Your Heart," "Saving Grace," "Stand" and "Broken Wings" all vary in the range of moderate pop/rock. Not to be fooled by the large amount of softer music on here, the lyrics are still as poignant as ever. Some standouts amongst that group are "Great Love" and "Broken Wings."

While New Horizons is an excellently executed album, it still, depending on perspective, has its kinks. One of Flyleaf's biggest highlights was Lacey's ability to deliver a hard rock song with such grace and uniqueness that others have only tried and failed to imitate over the years, and it was unfortunate that those kinds of songs are pretty scarce on New Horizons.

The latest chapter in Flyleaf's story is a sure to be a memorable one, as it is evident that these veterans left it all on the floor of that recording studio. What's presented is a labor of love that shines in its own right, and closes this section of their career with integrity and passion. - Cortney Warner, 11/13/12